Mum claims breastmilk 'cured' her stretch marks (and you might just want to try it!)

Stretch marks – the signs of what your body went through to bring you your children.

To be honest, I don't mind them. I love knowing how my body has grown and birthed and fed and carried and cared for two humans. It is amazing.

But if you have some, and are dying to make them fade away – here is a little trick you might not have heard of yet:

Yup – you read that right.

Mum, Chantelle Clarke, from Alberta in the US shared an image to Facebook showing just how much breast milk had changed the appearance of her stretch marks in only a few weeks.

The post has been shared more than 14,000 times and attracted over 11,000 comments, mostly people tagging who we're assuming are either pregnant and/or sporting some tiger stripes of their own.

"Been trying a little experiment for the last two weeks," Chantelle wrote in her post. 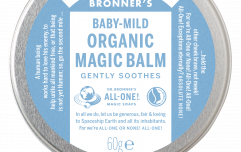 Three of our favourite products from the Dr. Bronner’s Organic Baby-Mild Range

END_OF_DOCUMENT_TOKEN_TO_BE_REPLACED

"Been putting breast milk on one side of my stomach. I can't believe the difference!!"

Chantelle encouraged other mums out there who were breastfeeding to rub some of their own breast milk into their own stretch marks to see for themselves.

She says she has been lathering up one side of her stomach each time she feeds her two-month-old baby and just lets it air dry.

"I put it on every time I nurse," she said, updating to say she has now been using it for three weeks.

"I noticed a big difference not just on colouring but also in depth of my stretch marks," Chantelle said.

Sharing the images after her mum urged her to share for other mums, Chantelle said she can't guarantee will work for everyone.

The thing is – rubbing breast milk into your stretch marks to fade them isn't a new concept:

According to Kidspot, mums on BabyCenter swore by this several years ago. One mum wrote almost the same thing as Chantelle did:

"I've started applying fresh expressed breast milk on my stretch marks after my showers, and the colour has gone from bright red to dark burgundy in a week," wrote arynnemommytobe.

Even back then there were people who had been told breast milk cures all different ailments and other mums who swore by it for their stretch marks too.

"How funny I was going to post this but I thought everyone would think I was crazy!!" commented one mum, adding, "I had a little stretch marks on one side of my belly and I started applying breast milk and it's pretty much gone ... no joke."

Another said, "I have used it on my stretch marks too! It does help!"


popular
Raising boys: The beautiful words every boy mum needs to hear
20 Unisex Irish Baby Names That Are Absolutely Magical
Line Of Duty season six to begin on BBC One on March 21
Study shows that having a daughter can change a man's brain in a special way
6 vey weird pregnancy tests from olden times
Top Tips On How To Recover And Refuel Your Body After Miscarriage
Book Extract: Healthy 'Fried' Chicken, Skinny Carrot Chips And BBQ Sauce
You may also like
1 day ago
Still in lockdown: 25 things to do if you are feeling bored today
2 days ago
Always waking up tired? 7 easy ways to feel more awake in the morning
2 days ago
Back to school (again): The 15-minute trick that is about to change your hectic mornings
1 week ago
Postpartum: 5 things to eat now to help your body heal after pregnancy and birth
1 week ago
Turns out, our friends are more important for our happiness than our husband are
1 week ago
Beauty food: 10 foods to eat every day for gorgeous, glowing skin
Next Page