Not everyone breastfed before formula was invented, you know

It's really ok if you can't, or don't

The formula shortage in the US has brought out the uncharitable side in some, as these things tend to. The narrative of "just breastfeed" is still being bandied about as is the question, "what do you think people did before formula was invented?"

Historian Carla Cevasco, Ph.D. shared some of the history of infant feeding in a viral Twitter thread to set the record straight and reader, she shut. it. down. *mikes dropping everywhere*

She said: "You may be hearing the argument that before the rise of modern commercial infant formula, babies all ate breastmilk and everything was great. As a historian of infant feeding, let me tell you why that’s not true.

"Sometimes the birthing parent was unable to breastfeed. Because: death in childbirth, or physical/mental health concerns, or need to return to work outside the home right after childbirth, OR their partner or enslaver forced them not to breastfeed so that they could return to fertility ASAP after giving birth.

"Sometimes baby was being cared for by carers other than birthing parent, including adoptive parents."

You may be hearing the argument that before the rise of modern commercial infant formula, babies all ate breastmilk and everything was great. As a historian of infant feeding, let me tell you why that’s not true.

Cevasco went on to explain what babies ate in those situations, instead of a parent's breast milk: "Sometimes someone else would breastfeed the child. This might have been a relative or neighbor doing it for free. Or it might have been a paid or unpaid servant or enslaved person doing it at the expense of their own nursing infant, who might starve to death as a result."

She also explained that some babies thrived on alternative diets, many of which are not recommended today: "Wabanaki women in the 18th century sometimes fed infants a mixture of boiled walnuts, cornmeal, and water; an English colonist, Elizabeth Hanson, reported that her baby thrived on this diet. In early modern Europe, babies often ate pap or panada, mixtures of animal milk or water, bread crumbs or flour. Sometimes these were boiled, sometimes they weren’t."

Let me repeat that: in the absence of modern formula, A LOT OF BABIES DIED OF ILLNESS OR STARVATION DUE TO LACK OF SAFE OR ADEQUATE FOOD.

In  short, as Cevasco illustrates, the idea that in pre-formula days, infant health was idyllic due to widespread breastfeeding, is simply incorrect.

She continues: "Let’s not demonise formula because of an imagined past in which everyone breastfed. In the ACTUAL past, babies f*cking starved and died of disease. Babies who would have survived today, because they would have had access to safe, nutritionally complete formula. Access that is now, horrifyingly and unjustly, under threat for many babies and their caregivers." 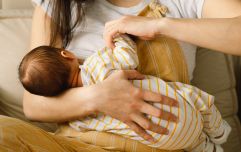 Calls for breastfeeding lessons to be introduced in schools

END_OF_DOCUMENT_TOKEN_TO_BE_REPLACED

Cevasco pointed out that there are multiple safe and nutritionally complete ways to feed a baby, and making sure babies don't go hungry should be our main goal.

Breastfeeding is amazing, fulfilling, a privilege, a pain (sometimes) and every birthing person who chooses to do it should be commended. But what Cevasco is teaching us is that we should also be so grateful for the existence of the magic of formula.

popular
HSE advises children with fever, cough or sore throat to stay home
Father took daughter to hospital three times before she died of Strep A
The government has launched a new funding model for Irish childcare services
Here's your chance to WIN a €500 toy voucher just in time for Christmas, with Petits Filous
"Hard to be a parent": Made In Chelsea's Maeva D’Ascanio rushes newborn son to A&E
Paris Hilton opens up on freezing her eggs during the pandemic
CMO confirms death of child in Ireland from invasive Strep A
You may also like
2 months ago
Kelly Osbourne responds to backlash over deciding not to breastfeed
2 months ago
New parents are being "thrown out" of hospital far too early
3 months ago
Over 70% of new mums in Ireland regret ending their breastfeeding journeys too early
4 months ago
New bill calls for more support for breastfeeding mums returning to work
4 months ago
Love Island's Camilla Thurlow called 'classless' for breastfeeding baby in car
5 months ago
Opinion: The obsession with routines and sleep training for babies is weird – and stressful
Next Page