None of my babies had colic, so I have no first-hand experience with just how traumatising this can be – to both babies and their parents.

However, one of my closest friend's babies all struggled with it, and so I saw them scream, cry and wriggle in pain – and my desperate, exhausted friend and her husband pace the floors with them, day in and day out – for weeks.

They tried pretty much every hack and trick going, from warm baths and belly rubs to drops that were meant to provide relied, yet nothing seemed to do the trick – and I'm not exaggerating when I say it nearly broke them.

However, now a TikTok user named @enchantednanny seems to have an answer. Filming from inside a clinic room, she shows how an osteopath practitioner, Lucy, helps the high-profile nanny and mom of four’s infant son create movement and space in his abdomen to promote better digestion and relieve gas.

The now-viral video has clearly resonated with so many parents across the globe —it’s been liked more than 2.2 million times.

Turns out, it’s all about the figure-eight motion.

What we see, is that Lucy gently moves the baby’s belly and hips from side to side—and just look at that little content face! 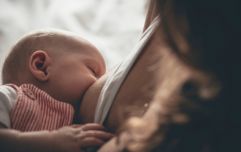 END_OF_DOCUMENT_TOKEN_TO_BE_REPLACED

As she works, the osteopath practitioner explains the mechanisms at play.

“Holding with a nice, wide grip, you’re always going clockwise as you’re moving with them. And you just let them move with you,” she shares.

"You’re creating movement. And if tummies don't have movement, then the milk gets the chance to move too slowly through there. And then it can cement and produce wind in their tummies, and that is painful. So anything you can do to help move the milk round is going to help.”

Adding in, @enchantednanny chimes in:

“I’ve been doing these movements between feeds. He now sleeps, has regular nappies and seems so much happier."

Many have tried the bicycle leg trick with babies that struggle with gas or colic, but Lucy explains it won't work every time.

“Now a lot of people will talk about bicycle legs and bringing the legs up, and actually, if they’re in discomfort, that can be helpful, but in between times, you want to get as much space in the tummy as possible because space gives everything a chance to move around.”

The osteopath practitioner goes on to explain that before babies are able to start crawling and walking, caregivers need to help them create space for digestion in their bodies by assisting them with movement until they're able to move around more themselves. And maybe even well after.

popular
Dunnes Stores launches stunning collection of Communion dresses
Siblings kidnapped in March 2022 have been found alive
Emma Pattison: Tributes paid following death of head teacher and her family
Adam Levine reveals gender of his and wife Behati Prinsloo's baby
Barista slated after they refused a pregnant woman caffeine
Murderer Daniel Murtagh scarred for life following Midlands Prison attack
Stacey Solomon hints at baby girl's name as due date nears
You may also like
1 week ago
Not every parent will agree with this mum's stomach bug hack
3 weeks ago
This clever hack could help keep your toddler awake in the car
3 weeks ago
Dublin Airport worker goes viral for singing and dancing in security queue
1 month ago
Little girl heartbroken after only two people show up at her birthday for odd reason
4 months ago
Mum shares important warning after almost losing her newborn to a kiss
4 months ago
'Don't do it if you are a parent' – paediatrician warns against viral organising hack
Next Page