However, we reckon it was also pretty refreshing to see the 32-year-old mum-of-two looking dishevelled and sporting maternity support underwear.

It's their second baba; daughter, Luna, turned two in April.

On Monday, Chrissy shared a pic of her postpartum body; she is standing with her four-day-old son wearing hospital-issued mesh underwear.

She is also topless, in the kitchen getting dinner ready... and with little Luna is in the background playing a purple toy harp.

Chrissy held a pear in a mesh wrap in her hand - a reference to a joke from Ali Wong's new Netflix special about motherhood, which compares the underwear to the fruit packaging. 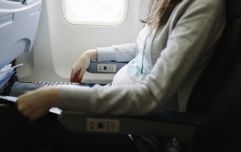 END_OF_DOCUMENT_TOKEN_TO_BE_REPLACED

A few days ago, the celebrity pair gave fans their first look at their little Miles on Instagram - with Chrissy saying "our household feels overwhelmed with love".

Chrissy also took to Twitter over the weekend to throw shade at her husband - who was attending a high-profile awards show.

"Wow didn’t you just have a baby John.

"Go take care of it! Disgusting!" Chrissy captioned a picture of her on her sofa with baby Miles while watching John being interviewed on the BBMA red carpet.

Of course, Chrissy was photographed out for dinner with her husband nearly two weeks after she gave birth to Luna - and she was widely criticised for it online.