But this deal is different because there's even less money involved in booking.

The deal includes flights from Dublin to Vienna, Brussels, London, Faro, Munich, and Luxembourg all for under €20 one way between now and March.

There's also flights to Barcelona, Ibiza, Budapest, and Lisbon for under €25 one way and flights to Tallinn, Pisa, Lanzarote, and Gran Canaria for under €40 one way.

Trips from Cork to Budapest, Barcelona, Tenerife, and Malta can also be bought for under 45 quid, with flights from Shannon to Krakow and Faro available for under €40 one way.

The Ryanair Seat Sale is here!

We have up to €30 off return flights right now on https://t.co/LTBSLn5QzB 👏 pic.twitter.com/DXXL2W5Ckk 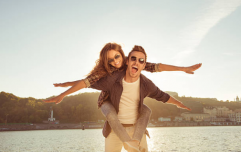 END_OF_DOCUMENT_TOKEN_TO_BE_REPLACED

The sale also offers up to 30 quid off selected return flights so, you know, saving a bit of cash during the harrowing month that is January is never a bad thing.

So get the Visa out, wha?

This comes after Ryanair was voted the world's worst airline for the sixth year in a row.

Consumer group Which? found that the Dublin based airline was the worst when it came to boarding, seat comfort, food and drink, and cabin environment.

You can check out more of the spring sale deals here.

popular
Adam Collard responds to claims he cheated on Paige Thorne
Childcare fees to be reduced by up to €170 per month
Vicky Phelan speaks about how she dealt with the trauma of her daughter's accident
Holly and Phillip weren't on media list for Queen's lying in state
Budget 2023: Parents will not have to pay for primary school books from next year
Coco Austin comes under fire for bathing daughter (6) in sink
Paralympian Ellie Simmonds targeted by online abuse after Strictly performance
You may also like
1 week ago
Center Parcs UK hit with backlash over decision to close on Queen's funeral
2 weeks ago
Everything you need to know about applying for your child's first passport
1 month ago
14 gorgeous baby names inspired by locations all over the world
1 month ago
Planning your next getaway? Here are 6 fun family activities to try this summer
1 month ago
10 hotels and resorts in Ireland with great activities for teenagers
1 month ago
I've hit the point where I'd rather travel for my child's birthday than organise a party
Next Page