Life Is Suite: An Autumn Weekend At The Lodge At Ashford

If you want to fully absorb and appreciate a change of season, you have to break free of the city.

You must remove yourself from the grey streets and the florescent lights and find a place where towering trees are disowning their leaves in russet and golden heaps.

To qualify as the perfect spot, the morning frost must sparkle on the grass undisturbed long enough to see it. When you take a big gulping breath of fresh air, it should be laden with the tang of wood smoke and the earthy scent of fallen apples.

It is a three-hour drive from Dublin City to Cong, County Mayo, but one of those hours was spent trying to escape Dublin. The other two we whiled away listening to a David Paulides podcast about people who had vanished, just like we hoped to do - for three days, at least.

We reached The Lodge at Ashford Castle, a handsome building built in 1865 for the Estate Manager of nearby Ashford Castle (more on that later), under cover of deep darkness and immediately began to revel in that thing most city slickers have long forgotten: silence.

The Lodge has been a hotel since 1935 but was given the Red Carnation Hotels treatment in 2014. Every square inch of our suite, The Huggard, combined the best of both worlds: a luxe modern bathroom and Downton-esque drapery; traditional handmade chocolates alongside a plush modern sofa; a king-sized bed piled high with duck-feather pillows and (glee!) toiletries by the delicious Handmade Soap Company.

Even the walls were upholstered in pristine striped fabric (yes, really - do not pack fake tan and leave the red wine in the bar), giving the room a magical soundlessness, like you just pushed the mute button on your life. 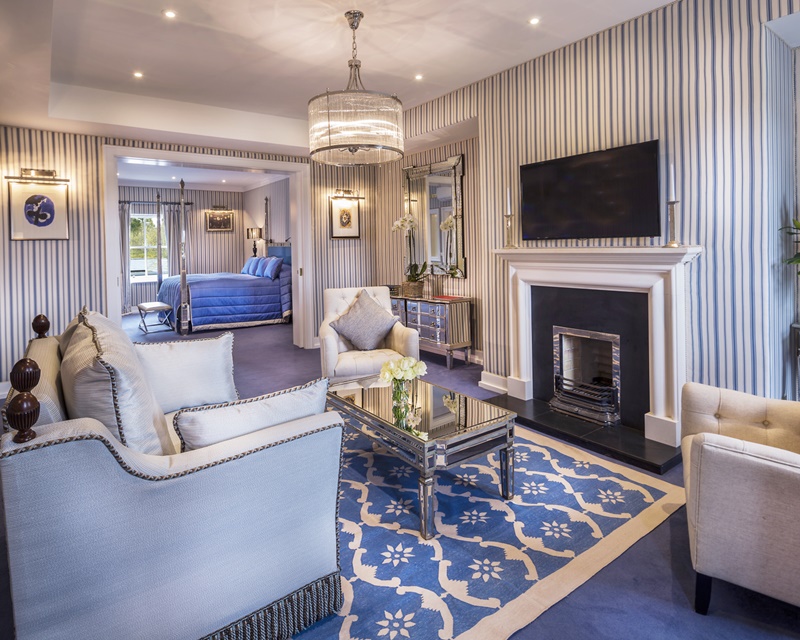 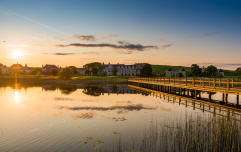 Just the 2 of us: 7 super-romantic getaways in Northern Ireland right now

END_OF_DOCUMENT_TOKEN_TO_BE_REPLACED

Within minutes we were curled up on a sumptuous sofa in front of a blazing fire downstairs like we owned the place, glasses of Malbec in hand. The staff of the bustling Quay Bar and Brasserie humoured us and delivered a fabulous dinner of mussels in cider and the fattest crab claws either of us had ever seen followed by fish and chips and pork belly with crisp crackling.

After another cheeky glass it was time for bed... and a dreamless sleep on a colossal Egyptian cotton cloud.

Having arrived by darkness, a surprise awaited us in the morning light: we opened the leaden curtains to reveal a picture-perfect view of boats bobbing on the water in the quay below the hotel. 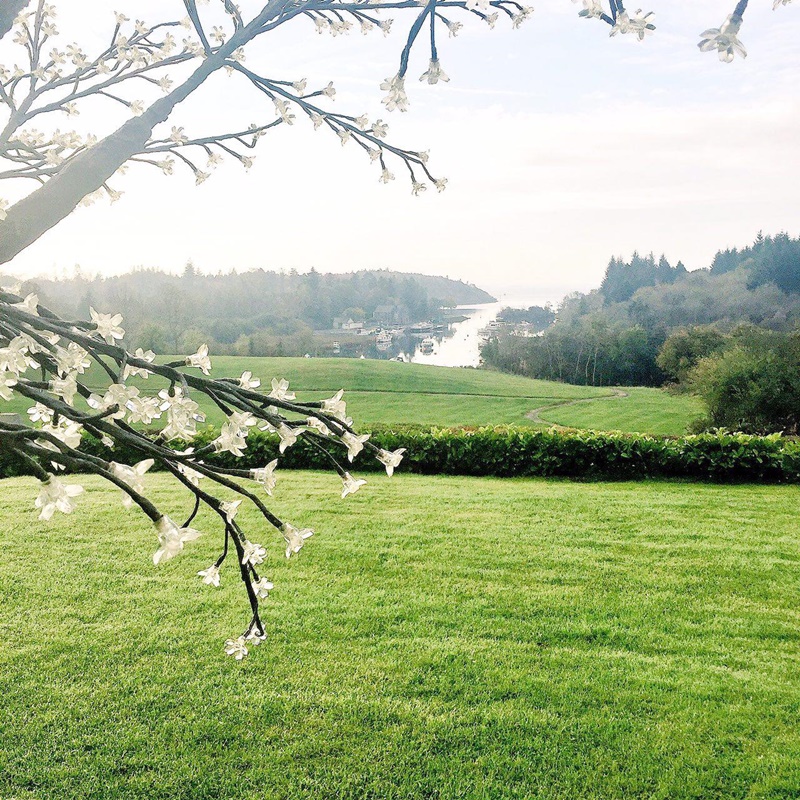 After a heavenly breakfast of smoked salmon on freshly baked seeded bread and Himself's compulsory Full Irish (albeit a far fancier version than he's accustomed to), as well as the obligatory coffee and pastries, we set out to explore the estate, following a handy map given to us at the hotel reception.

The warm sunshine was so enticing we decided to do something completely out of character for us: an actual "activity". Collected on the doorstep of the Lodge in the hotel Range Rover (natch), we were deposited among the trees and fitted for bikes and safety gear, before heading off on a guided bike ride that swept through woodland trails and past the old schoolhouse, revealing jaw-dropping views of Lough Corrib on the way. 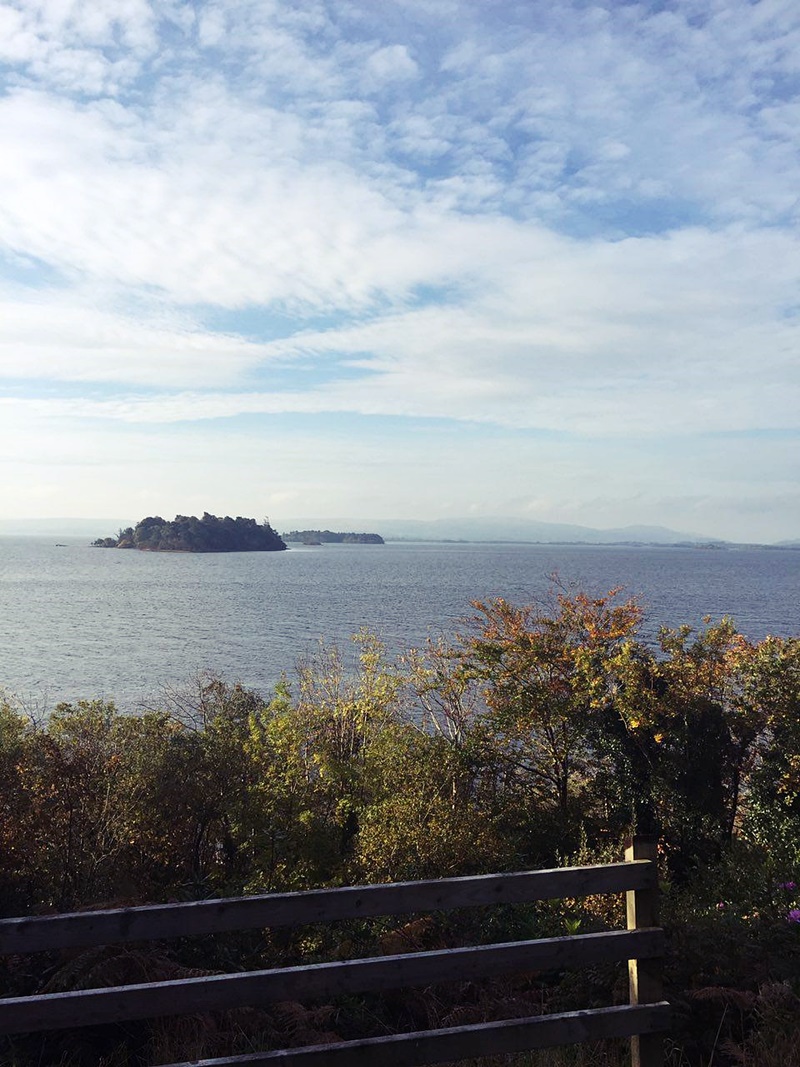 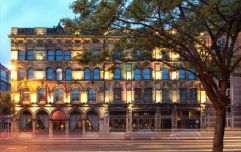 5 super-romantic Irish hotels (perfect if you are hoping to get away this Valentine's Day!)

END_OF_DOCUMENT_TOKEN_TO_BE_REPLACED

Other sights of note include the estate's formal gardens and this little summer house, built by Sir Arthur Edward Guinness (Lord Ardilaun) as a gift for his beloved wife Olive, who loved to paint here.

Look through the window and you'll see a message to her engraved in the stone of the chimney breast - the romance! 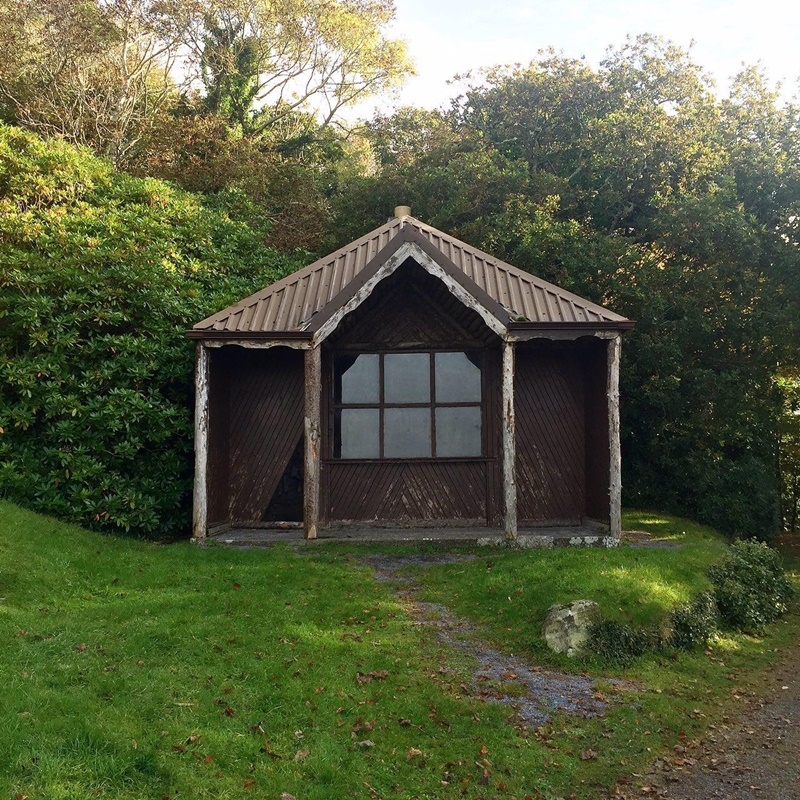 Returning all rosy cheeked and clear-headed, there was time for a hot whiskey in the cosy bar before the next new adventure.

For a hobby that sounds like it might be more suited to the schedule in a retirement home, watercolour painting with tutor Angela Emsen West was a riot. After the initial giggles dispersed (I blame the hot whiskey), the entire class settled into a quiet reverie as we practiced the easy techniques Angela taught us. As someone who has never been one for mindfulness, I found the afternoon infinitely more relaxing than the average yoga class... and much more fun. 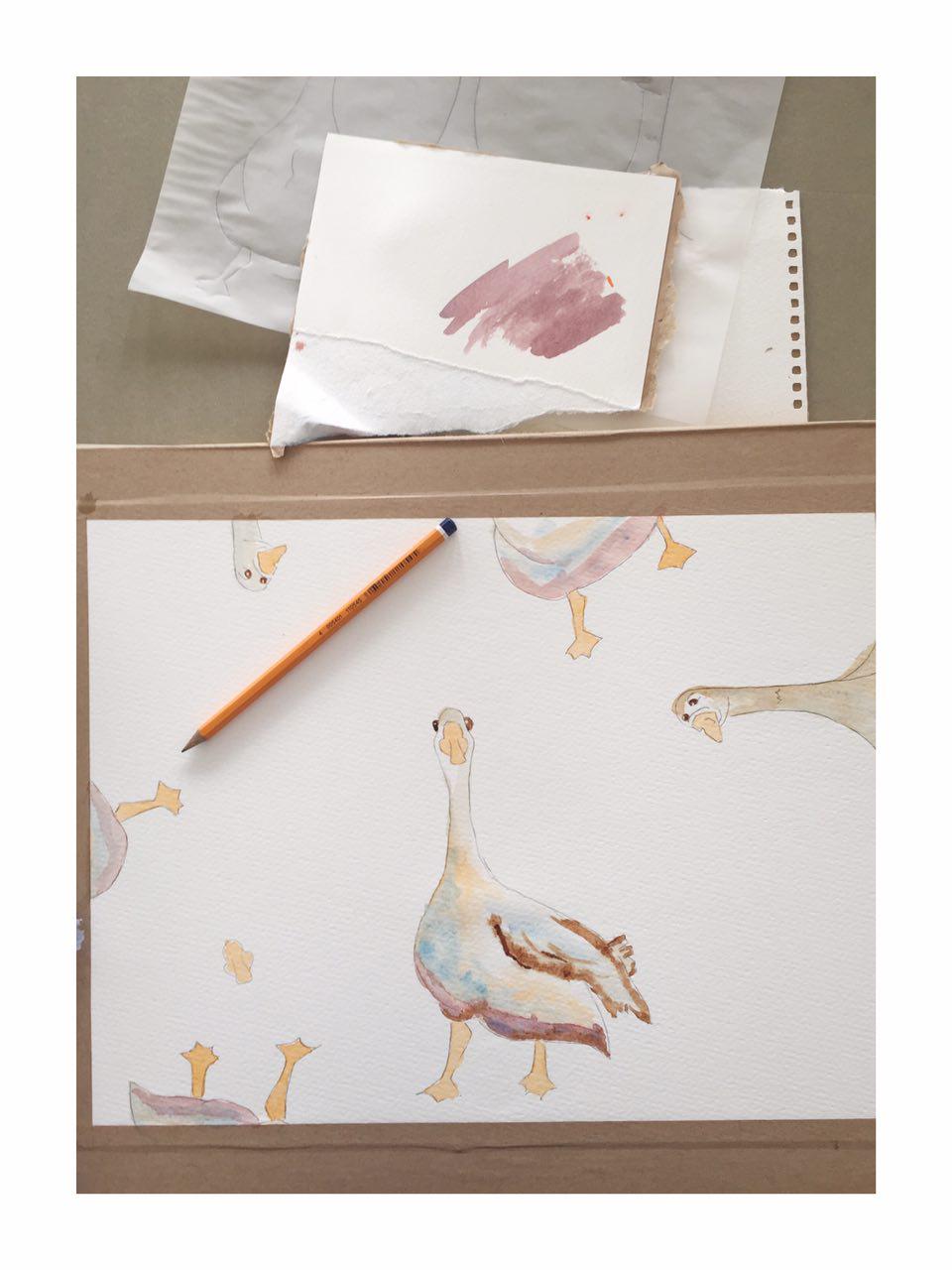 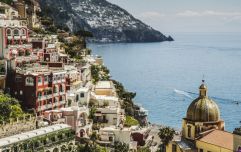 Planning a babymoon? Five romantic European hotels to escape to before your little one arrives

END_OF_DOCUMENT_TOKEN_TO_BE_REPLACED

A couple of Cong artists

Fresh from our first painting class, we stowed our works of art (two rather wonky looking geese) in the room and set out on a stroll into the storybook village of Cong. Take the road from the Lodge that ambles through the Japanese Red Cedars and Silver Firs, past the Castle gates with their uniformed guard and you'll arrive right in the centre of town, which also happens to be the world-famous setting of the Oscar-winning classic film The Quiet Man, shot in Cong and on the grounds of Ashford Castle in 1951. 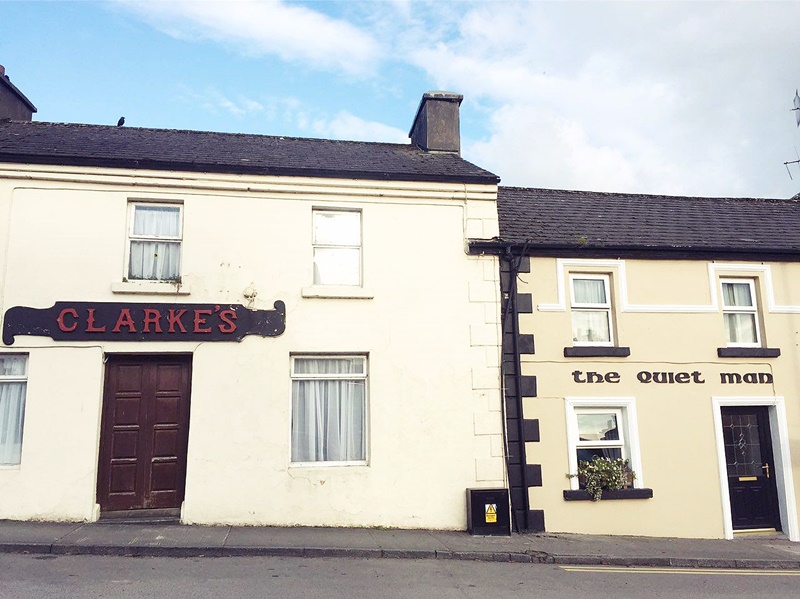 The film's stars, the late John Wayne and Maureen O'Hara stayed at the stunning Ashford Castle during filming and O'Hara famously returned to the village decades later with Wayne's daughter and grandaughter for the 60th anniversary of the movie. 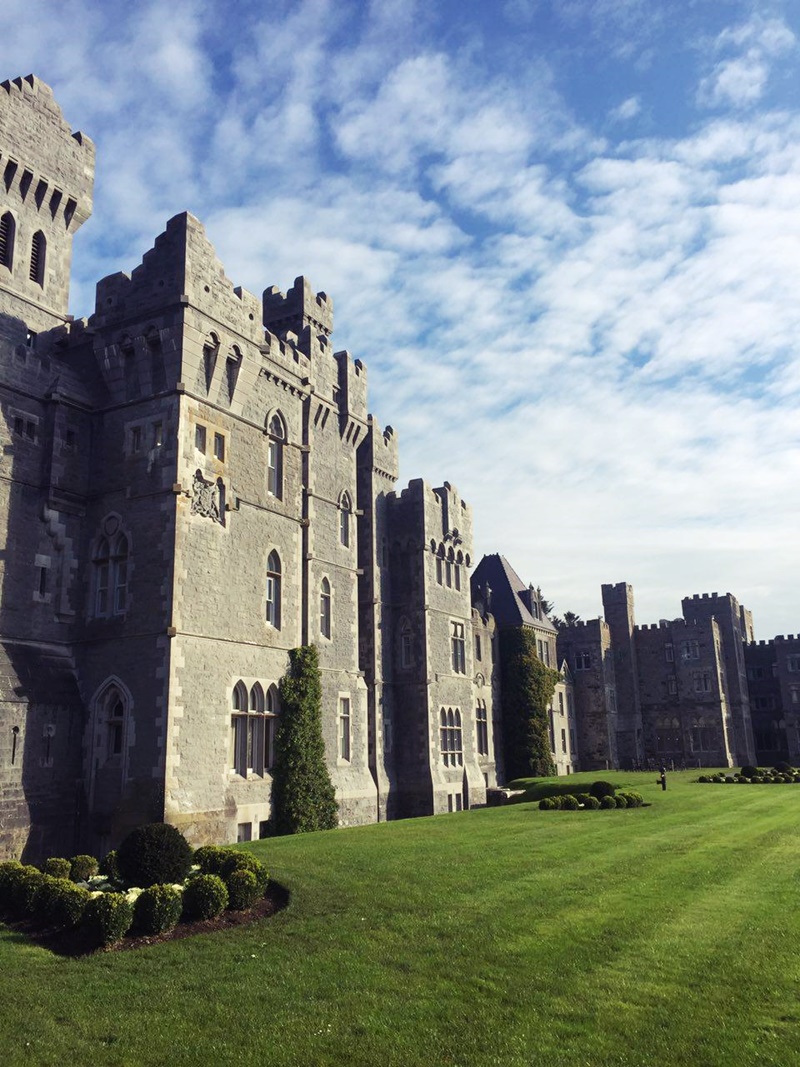 A commemorative statue of the pair takes pride of place in the village opposite a 13th century Augustinian abbey and it's worth rewatching the movie before visiting so you can fully appreciate The Quiet Man Cottage Museum, which allows visitors to feel as though they are on set, as well as various other fan must-sees such as The Dying Man's House and Pat Cohan's Bar, where you'll find a replica of the interior featured in the film.

Even if you're not a movie buff, Cong is worth the trip if only to see for yourself how spotlessly clean and neat it is. Despite the countless tourists and visitors who stream through daily, there isn't a petal out of place in a flowerbox or a window that hasn't been buffed and polished to within an inch of its life. Whoever's in charge down there could show the rest of us a thing or two about how it's done. 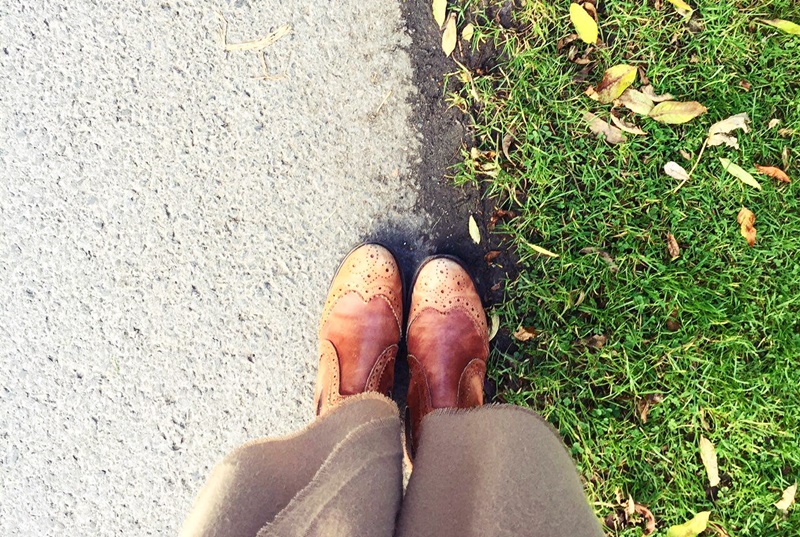 After a stroll around town and drink in the golden evening sun outside Pat Cohan's bar, we made our way back to the Lodge at Ashford as evening fell.

For all its cosy hospitality, the Lodge at Ashford is definitely the cool younger cousin of the stately Castle. The stately rooms have serious personality, from the fun zebra-print rugs and bowls of chocolates to the electric crimson bar.

After a whiskey and toasted cinnamon cocktail (the house mixologist Sebastian is an artist) we sat down for dinner in Wilde's restaurant on the restored first floor, named after local character Sir William Wilde (father of Oscar, don't ya know).

The meal, in short, was epic; a multi-course festival of Irish food devised by Jonathan Keane. There was Kilmore quay scallop with pea and truffle, scallop roe mousse and lemon oil; juicy steaks and the most incredible duck, roasted over lavender and hay and served at the table from a wooden box by the lovely Nicky. 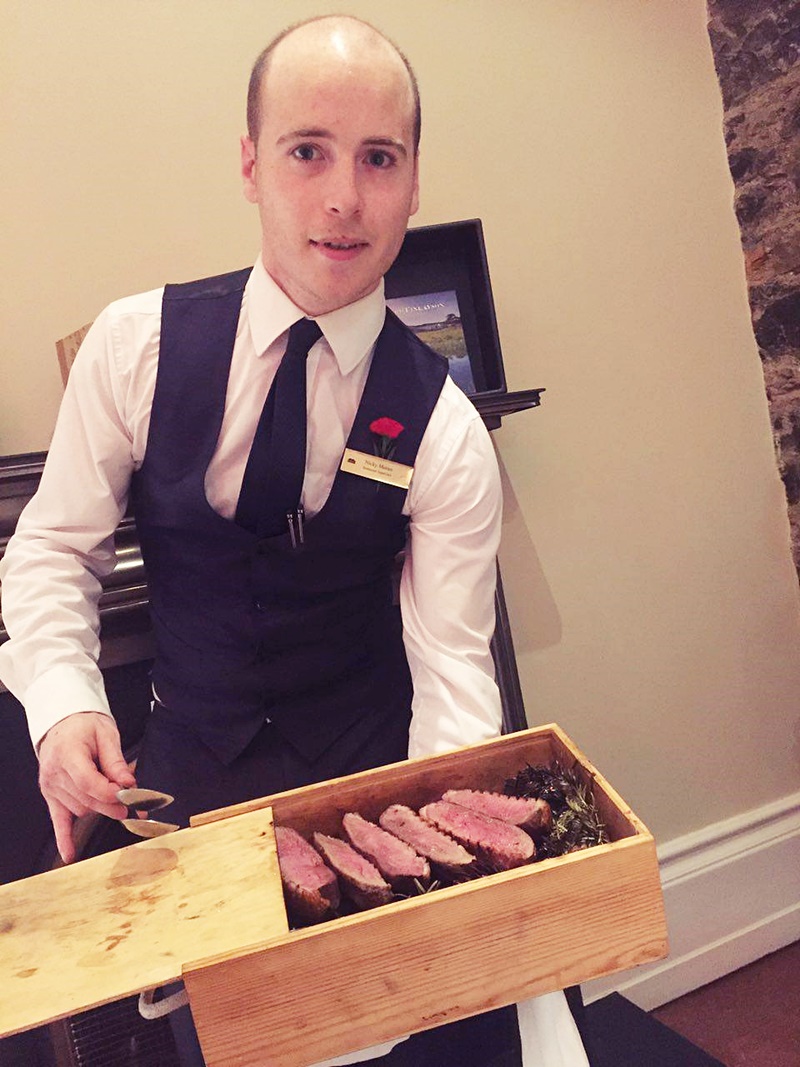 Strong coffee and pancakes with fresh berries (and another Full Irish for himself) were just what the doctor ordered the next morning, and late checkout (1pm!) meant that we could retire to our suite with the papers for a few more heavenly hours.

We left the Lodge in the warm afternoon sunlight determined to return.

Hopefully just in time to see the season change again.

Midweek rooms at The Lodge at Ashford Castle are available from €141. To book a group watercolour painting class at The Lodge with Angela Emsen West, contact the hotel on 094 954 5400. Otherwise keep an eye on the website for the date of the next scheduled Watercolour Weekend.


popular
"Don't you want to feel like part of the family?" Spencer Matthews wants Vogue to take his last name
Sligo teacher creates animated video series for Junior Cert revision
10 great (and affordable) buys to give your home office a bit of a facelift
Positive parenting: 11 little things that mean the world to kids
5 amazing Irish baby clothing brands that you probably haven't heard of yet
Mother-in-law wants her grandkids to call her 'mommy' and there's uproar
These 5 Foods Could Increase Your Chances of Having Twins
You may also like
1 year ago
Valentine's Day: 3 cities, 3 hotels – all the romance you can wish for
1 year ago
Chasing the Northern Lights: The Norwegian city you really need to put on your bucket list
1 year ago
Weekend break: Lonely Planet just voted these three cities as top places to visit in 2020
1 year ago
'Best hotel in 2019' – check out the gorgeous Lisbon hotel that just scooped the award
1 year ago
The insanely romantic country house hotel perfect for a winter weekend away
1 year ago
Need a break? 10 seriously sexy European hotels for when you need an adult-only escape
Next Page