Every year before Love Island starts and just as it comes to an end, we find ourselves having the same conversation - when will there be LGBT+ representation?

The question is asked constantly, and while the series has gone on for seven series now, it's only a matter of time before it's addressed.

ITV boss Kevin Lygo has given somewhat of an answer to this after fans are constantly asking, but it might not be the one they're searching for.

Speaking to the Edinburgh TV Festival, the ITV director of television said: "Love Island is a particular thing, it’s about boys and girls coupling up so if you want to do a gay version, or widen it, it is discussed and we haven’t yet found a way that would make it suitable for that show."

So there we have it, while the show is staying the way it has been traditionally done for now, the Love Island team have looked into it and we could get an LGBT+ version sometime in the future.

While we are yet to get a separate version of the show, there has been LGBT+ representation in past seasons. 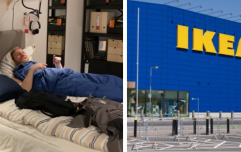 Shoppers have a big sleepover in Ikea after being snowed in

END_OF_DOCUMENT_TOKEN_TO_BE_REPLACED

During the 2019 series of the Australian Love Island, Phoebe and Cassie decided to couple up after the two revealed they had been with women in the past and Phoebe admitted she had more of a connection with Cassie than any of the boys.

While they had never been in a relationship with another woman, they coupled up and gave it a shot - but it didn't last too long.

And back in 2016 on the UK version, something similar happened when Katie Salmon and Sophie Gradon coupled up during the final week of the show.

They were the first same-sex couple on any season of the show, leaving two boys vulnerable at the recoupling and shocking the rest of the islanders.


popular
"She is too young": Kourtney Kardashian mum-shamed over daughter's latest TikTok
Brother of Amber Gibson charged in connection with her death
Here are the final post dates for Christmas 2021
Tánaiste Leo Varadkar reassures kids that Santa will visit Ireland this Christmas
Father and girlfriend found guilty over death of 6-year-old Arthur Labinjo-Hughes
My father-in-law revealed I suffered a miscarriage on Facebook- how will I ever forgive him?
"He was my best friend": Mother of Arthur Labinjo-Hughes pays tribute to her son
You may also like
2 months ago
Research finds that calling trans youth by preferred name can reduce suicides
11 months ago
Hungary passes law banning same-sex couples from adopting children
1 year ago
93 percent of Irish LGBTI+ youth experiencing mental health issues during lockdown
1 year ago
LGBTQ+ discrimination banned in the workplace, US Supreme Court rules
1 year ago
Child and Family Relationships Act 2015 brought into law for female same-sex couples
1 year ago
'Not enough': 60 percent of children not covered by new LGBT+ parents law
Next Page