Toddler tries running away from home – because Cocomelon was turned off

"That show has to have some type of drug in its programming..."

We all know that if there's one way to get a toddler to come running, it's by turning on Cocomelon.

Still, we wouldn't have guessed that turning the show off would cause the extreme opposite.

Tionna Clark's godson decided to try and run away from home when she muted Cocomelon to make a call.

Little Prince Christopher, a toddler from Ohio in the US, was ready to up and leave in his bare nappy.

The boy went into another room, got a backpack and began packing.

"He put a toy and a diaper in it, and with one croc [on his foot], grabbed his cuppie and was really trying to leave," Tionna continued.

Unfortunately for Prince Christopher though, the door was locked, and all he could do was smack the keys in frustration. 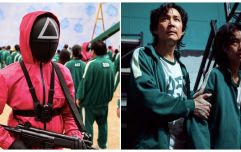 END_OF_DOCUMENT_TOKEN_TO_BE_REPLACED

His godmother shared the hilarious moment on TikTok, where it has racked up almost 8 million views so far.

"Oh man the power of Cocomelon is real," one TikTok user commented.

"That show has to have some type of drug in its programming bc this is EXACTLY how my two-year-old acts," wrote another.

Tionna said her godson loves to sing and dance, and that Cocomelon is "definitely his favourite of all time."


popular
11-year-old girl dies after suddenly collapsing at school
"We need our little girl home": Mum of missing 4-year-old Cleo Smith speaks out for first time
Heads up: Aldi has a gorgeous toy collection coming this month
70-year-old woman becomes first-time mum after welcoming baby boy
Everything parents need to know about the respiratory syncytial virus
Babysitting your grandkids is actually good for your health, according to science
Motherhood and MS: Living with multiple sclerosis is a family affair
You may also like
1 day ago
This little boy has the most amazing reaction to his mum's pregnancy announcement
1 week ago
Paediatrician says children should 'share a bed with mum' until the age of three
1 week ago
This mum's chore chart for her kids is being praised as 'life changing' by other parents
1 week ago
The tooth fairy letter many parents are feeling a little divided about
2 weeks ago
'Soak it all in' – the words on enjoying time with your kids that will hit you hard
3 weeks ago
Mum sparks debate after admitting her daughter's needs come after her and her partner's
Next Page