One child has died from the rare strain of hepatitis.

Doctors in Ireland believe a rare strain of hepatitis is linked to a virus.

The virus, which is not Covid-19, is usually harmless but has been causing outbreaks of this rare strain over the last few months.

Doctors have grown concerned about the outbreak, but believe they're closer to finding a cause.

32 children have been diagnosed with the rare strain in recent months.

One child has sadly passed away and two others needed liver transplants.

According to The Independent, disease experts are working with hospitals to uncover the cause.

Recent studies claim the rare strain could be linked to an adeno-associated virus, but this theory has not yet been confirmed. 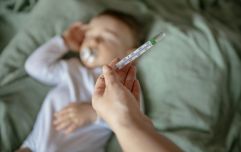 Warning issued to Irish parents after increase in RSV cases

END_OF_DOCUMENT_TOKEN_TO_BE_REPLACED

Doctors have reassured parents that cases are rare, but knowing the symptoms is key.

Parents have been told to be aware of the symptoms of hepatitis.

The main symptoms include jaundice, a fever, diarrhea, as well as respiratory issues.

Parents have been told to alert their doctor immediately if their child has symptoms.

Experts stressed that you should not delay in contacting a health professional.

popular
Brian Dowling: "Aoife never thought the baby was hers"
Lauren Graham shares who she thinks Rory's baby daddy is
7 Christmas markets and Santa experiences to visit with kids this winter
Release date for Prince Harry and Meghan Markle's Netflix series confirmed
Warning issued to Irish parents after increase in RSV cases
6-year-old child dies from bacterial outbreak at school in England
Kourtney Kardashian explains why she kisses Travis Barker....like that
You may also like
1 week ago
Warning to Irish parents following chickenpox outbreak
1 month ago
Only 1 in 4 children are vaccinated against Covid-19
1 month ago
Daytime naps should stop when child turns two, science claims
1 month ago
Parents told to ensure children's meningitis vaccines are up to date
1 month ago
Parents outraged over National Children's Hospital delays
1 month ago
Expert warns children are suffering 'burnout' from too many activities and sports
Next Page