I remember the day we brought our first baby home from the hospital, and my boyfriend looked at me as we were leaving and asked: "Can we just take her and go..?"

However, there were also times when I did feel a little lost. And this is despite having my mum there for a lot of the time, my pediatric nurse best friend on the other end of the phone and a loving partner by my side. I mean; there were so many questions, so many things I didn't know if I was doing right. Nights when I struggled to settle her that felt like an eternity, cries that I didn't understand, boobs that ached, babygros that I was afraid to pull over her head in case her neck broke...

I was, like every new mum, tired and bewildered, exhausted, and, at times, rather lonely.

And much as I count myself lucky for the amazing healthcare system in Norway, where I gave birth, and my husband and family, and look back at these post-partum days with mostly warm and lovely feelings, I still remember those nights when it also felt like I was slowly going crazy – I think we all have those.

Which is why, when I came across a Facebook post by Canadian mum Anneliese Lawton, it made me remember the rollercoaster of emotions that those first few weeks of motherhood really is. 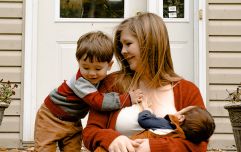 END_OF_DOCUMENT_TOKEN_TO_BE_REPLACED

So if you know someone who has just brought their baby home from the hospital – show her some extra care. Send a text and ask if she needs anything. Bring food and coffee. Offer to help out with older kids or pets. Bring her some new pj's and cozy silppers. Whatever it takes – just make sure she feels cared for. New mums deserve more of that.

popular
Emma Pattison made distressed call to sister before murder-suicide
Dunnes Stores launches stunning collection of Communion dresses
Siblings kidnapped in March 2022 have been found alive
Expert says Cocomelon acts "as a drug" to kids' brains
Vogue Williams opens up about her divorce from Brian McFadden
Shows like Bluey and Peppa Pig are actually bad for kids, expert warns
Stacey Solomon hints at baby girl's name as due date nears
You may also like
1 month ago
"I felt so much regret": Ashley James says she once regretted motherhood
1 month ago
Rebel Wilson felt "disconnected" after welcoming baby via surrogate
2 months ago
Cameron Diaz gets honest about becoming a mum in her 40s
3 months ago
My daughter doesn't want her "embarrassing" grandparents at her birthday- what should I do?
4 months ago
Positive parenting: 5 signs you are doing a great job as a parent
5 months ago
"Don't slate me": Is it okay to leave my baby alone in the car?
Next Page