The threat to the public is currently low.

Traces of the polio virus have been discovered in England.

A national incident has been declared by the UK's Health Security Agency.

It is believed traces of the virus were found during an inspection in a sewer in London.

The risk to the public is currently extremely low, but they have advised people to be aware of the signs of polio.

An investigation has been launched to analyse public transmission.

Experts believe a family in the northeast of London spread the virus to their close contacts.

It is understood that they are now shedding the type 2 poliovirus strain in their feces.

What are the symptoms of polio?

The main symptoms caused by polio include fever, muscle stiffness, and vomiting. 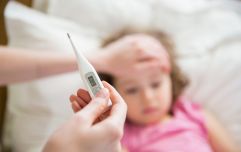 The Strep A symptoms every parent should be aware of

END_OF_DOCUMENT_TOKEN_TO_BE_REPLACED

However, in extreme and rare cases, some people may experience temporary or permanent paralysis.

According to the HSE, most people do not display symptoms and therefore won't know they're infected.

The virus has not been recorded in Ireland since 1984. The polio virus used to be extremely common.

Cases have fallen dramatically since the introduction of the polio vaccine in 1957.

"The infection is still found in some parts of the world. Because of this, there is a very small risk that polio could be brought back to Ireland," the HSE stated.

Anyone who is not vaccinated is at risk of contracting the polio virus.

You can read more about the polio virus here.

popular
Bride asks for divorce day after wedding following groom's disrespectful cake stunt
Entrepreneur schoolboy has made £1,000 from selling sweets
Police believe they know what happened to missing dog walker Nicola Bulley
Dad admits he hates his daughter's name so much it makes him uncomfortable
Students given £500 after uni was unable to give them their degree certificates at graduation
Couple decide to live on cruise ship permanently after finding it's cheaper than paying mortgage
Going on solo holidays is good for mothers, science says
You may also like
1 month ago
Irish parents urged to keep sick children out of school and creche
1 month ago
What are the symptoms of scarlet fever aka Strep A?
2 months ago
Third child dies from scarlet fever in UK- here are the symptoms to look out for
2 months ago
Irish dad shares warning after his 12-week-old baby was hospitalised with RSV
3 months ago
HSE issues warning after major increase in Norovirus cases
3 months ago
Parents told to ensure children's meningitis vaccines are up to date
Next Page