Shaking a baby can cause brain injuries similar to those from boxing, warns doctor

Shaking a baby can lead to lifelong brain injuries, doctors have warned.

The NSPCC (National Society for the Prevention of Cruelty to Children) investigated 229 cases of shaken baby syndrome in the UK in the ten years up to 2018.

A form of abuse that occurs when an infant or child is shaken vigorously, it can in some cases lead to death.

One doctor has cautioned that it has the same impact on the brain as boxing would.

"In boxing the incidences of the head blows are relatively infrequent and so that damage is taking place over, typically, years," John McMullen, consultant paediatric neurosurgeon at Sheffield Children's Hospital, told BBC News.

"Whereas with an infant shaking, the damage is occurring in seconds."

Crying is the most likely reason for parents to shake their baby, according to research.

"We don't know the full scale of the problem," said Helen Westerman, national safeguarding lead at the NSPCC. 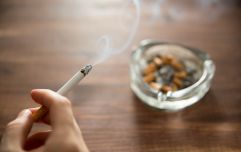 END_OF_DOCUMENT_TOKEN_TO_BE_REPLACED

"We know that many parents that do shake their baby don't do it intentionally, are doing it in the spur of the moment when something has just broken or gone wrong, and most parents want to look like they're coping."

The charity has launched a new campaign to educate parents and carers on the dangers of shaking a baby.

'ICON: Babies Cry, You Can Cope' aims to remind people that crying is normal and help them deal with it.


popular
Here's what bookies think Harry and Meghan will name their baby girl
Pregnant Binky Felstead poses topless with baby bump
Vogue Williams son Theodore recuperating after an accident at home
Pregnant? Forget the baby manuals, says Maura Derrane 'you might as well burn them'
Can you pronouce these 7 'unique' baby names? They're trickier than you think
Fundraiser set up for family of Tipperary 3-year old who died in tragic bus accident
Chrissy Teigen explains why she posts more photos of her daughter than her son
You may also like
1 day ago
Conor McGregor just told his little boy to punch another child in the mouth
1 day ago
The royals have just revealed a never-seen-before family photo – and it's adorable
2 days ago
Help keep your children safe online with this new Irish resource
2 days ago
Queer Eye's Tan France and his husband are expecting their first baby via surrogate
3 days ago
New website Babyclasses.ie lets parents search and book hundreds of local (and online) baby classes
4 days ago
Six stillbirths linked to Covid-19 in Irish hospitals
Next Page