My own two children are still full-on subscribers to Santa, our Elf on the Shelf Snowflake, the Easter Bunny and our resident Fairydoor fairies, Pixie, Bluebell, Daisy and Jingle (yes – we have FOUR of them, which I know is crazy, but such is life).

However, I am aware that as they get older, they'll get to a point where they'll start questioning all this magic, and naturally, much as spending hours replying to fairy letter and moving stuffed elves around can be tiring, I dread the day when the magic stops.

For Florida mum and TV reporter Kristin Hewitt, that time came around recently, and, in fairness to her 9-year-old, how she questioned the whole mystery of the Tooth Fairy was rather hilarious.

Back in October,  Hewitt posted a photo of the hand-written note her 9-year-old daughter Lila had left out. It seems she’d decided to take advantage of her little sister Emy’s lost tooth, in order to get to the bottom of this whole Tooth Fairy business once and for all. 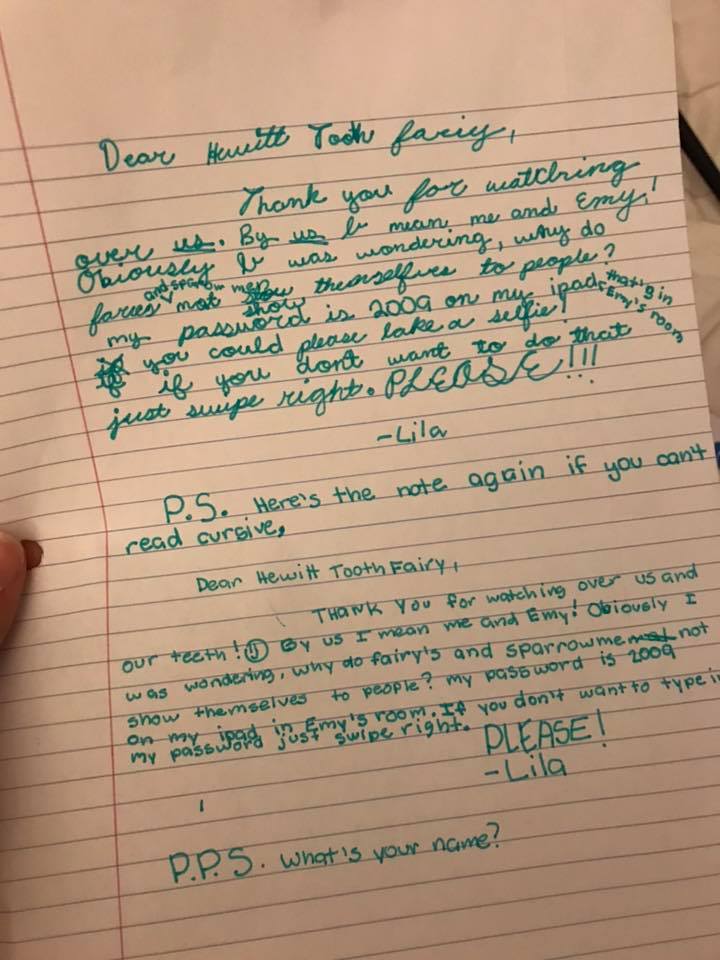 Thank you for watching over us and our teeth! By us I mean me and Emy! Obviously I was wondering, why do fairy’s (and sparrows) not show themselves to people? My password is 2009 on my iPad in Emy’s room if you could please take a selfie! If you don’t want to type in my password just swipe right. PLEASE, Lila, P.P.S What’s your name?"

Having found the letter, here is Hewitt's FB post in full:

"I know everyone thinks their kid is brilliant, but ours really is. As I tiptoed into our six-year-old’s room to play the tooth fairy tonight - I found this. 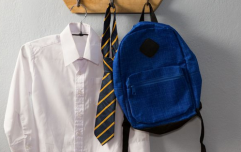 Back to school: The clever school uniform hack that'll save you time and stress

END_OF_DOCUMENT_TOKEN_TO_BE_REPLACED

A note from her older sister. Yep. She hijacked our little one’s tooth fairy visit and is asking for proof.

Complete with her iPad and password. And if the tooth fairy can’t read cursive, no biggie, she wrote it in print as well.

My husband and I talked about me putting on a wig, wings, and adding a bright light behind me to actually take a selfie. And we also looked at tooth fairy apps, but that just made the lie even worse in my opinion.

So I went with the old line, “What’s an iPad?!” Because a note from Tabitha the Tooth Fairy totally isn’t lying. ?

This is the magical part of childhood I love SO much. The unexpected ways their minds work, their curiosity, their trust, and their pure innocence.

I also feel immense guilt about lying to her about these mythical creatures, but at this rate she’ll figure it out soon. 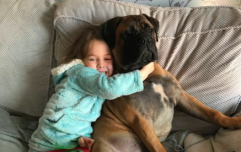 Kids have been applying to 'work from home' with their dogs during lockdown and nah, too much

END_OF_DOCUMENT_TOKEN_TO_BE_REPLACED

When did your kids find out the truth about the tooth fairy?

(BTW if your kids go to our school please don’t show them this!)"

“I was super surprised when I tiptoed into Emy’s room to play the Tooth Fairy and saw a note not only from our little one, but our older daughter as well,” Hewitt explains. “They never leave notes, this was a first! And then I saw her big sister’s iPad was there, and I was super confused.”

Hewitt says she tiptoed back out of Emy’s room to read the notes her daughters left for the Tooth Fairy and once she realized that they were after definitive proof of the fairy’s existence — by requesting a selfie, no less — she couldn’t stop laughing.

“Well as you know, if a tooth fairy is seen, they lose their magic flying powers,” Hewitt explains. “So of course she couldn’t snap a selfie! Also, she didn’t know what an iPad was because hello, they don’t have that type of technology in Tooth Fairy-ville! The girls were shocked the [Tooth Fairy] didn’t know what an iPad was, so they wrote her another note asking if they could be pen pals.”

Readers will be pleased to learn that Emy received money and even a bonus piece of candy for her “superior Nancy Drew sleuthing skills.”

“This is my favorite part of being a mom, seeing the world through your kid’s eyes,” Hewitt shares. “I love their wonder and curiosity so much, and I’m really savoring these last moments where she still believes. I know that time is ticking by quickly, and I do feel a bit of guilt not telling her the truth at almost 10, but man I love the magic of childhood.”


popular
Paris Hilton undergoing IVF with partner Carter Reum
12 oh-so-sweet one-syllable baby names that we absolutely adore
RTÉ Prime Time footage shows tanned Irish holidaymakers returning from Lanzarote
Study finds husbands with controlling wives live longer and are healthier
20 'Marmite' baby names which people either love or hate
Selling Sunset season 4 is coming to Netflix this year, apparently
Influencer justifies trip to Dubai saying it was essential for her "mental health" and to "motivate" followers
You may also like
4 days ago
'It's a baby prison' – one mum's controversial approach to parenting has caused some backlash
1 week ago
Stacey Solomon was trolled for her boys having three different dads – and here is her response
1 week ago
The genius TikTok wrap hack that is about to save your homeschool lunchtime
2 weeks ago
This mum meal plans for an ENTIRE YEAR – and here is how she does it
2 weeks ago
Wow! The incredible video that shows the impact pregnancy really has on your body
4 weeks ago
Jennifer Aniston's new Christmas tree ornament just caused a crazy amount of backlash
Next Page