This mum reported her daughter's bully to the police

A mum has reported her daughter's bully to the police.

Joannie Rosevear is a mum from Canada.

She recently penned a Facebook post saying that the bullying her daughter Kianna has been receiving as of late has been so bad that she took it upon herself to report the bully to the police.

Joanne said that her nine-year-old was assaulted by a 14-year-old boy who picked up Kianna, "slammed her on bus floor hitting her head and then drug her down the aisle of the school bus hurting her."

"... As he was dragging her, she was crying, scared and needed help! The teenage girls who were in the back of the bus started yelling at her, to not be such a stupid f*cking bitch!!! (Also confirmed by many witnesses) She’s 9! I am enraged!!!

"My little girl has had nothing but horrible abusive, bullying situations in school since she was 7."

Joannie then went into detail about some of the other abuse she had experienced growing up. 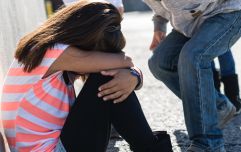 How do you handle your children's bully? This worried mother took out a restraining order

END_OF_DOCUMENT_TOKEN_TO_BE_REPLACED

This ranged from a previous teacher that screamed at their students and called them names and consistent bullying from male student that was larger than Kianna.

"I am firm believer that children should protect themselves if someone is physically hurting them. BUT what do you do when it’s a small child having to protect herself from grown boys?! It’s not like she can fight back!

"Who’s going to take accountability instead of trying to sluff it off on someone else? When will the bullied be protected properly and the bullies be held accountable?"

The mum said that she reported the 14-year-old to the police.

Her post was shared just after she left the station after reporting the boy's behaviour.

popular
Breaking is the haunting novel parents need to read this October
Smyths issues warning to parents ahead of Christmas
Here's everything coming to Netflix this October
Riverdale actor Ryan Grantham charged with murder of his mother
80% of Irish kids aged 13-17 have experienced sexual harassment
Coco Austin comes under fire for bathing daughter (6) in sink
Marnie Simpson reveals her baby boy has plagiocephaly
You may also like
4 months ago
Young boy loses his fingers in bullying incident at Welsh school
4 months ago
6-year-old boy left "scarred for life" after bullies allegedly set him on fire in US
5 months ago
The Mothership: What to do if your child is being bullied
5 months ago
Teacher uses two apples to show her students the effects of bullying
9 months ago
France approves proposed law to criminalise school bullying which could see bullies jailed
10 months ago
Mum shocked to find hickeys on bullied 6-year-old's neck after school
Next Page