240,000 pupils in over 1,000 mainly disadvantaged schools across Ireland will soon see the advantages of the €50m School Meals programme that is being put into action shortly.

In an attempt to shake up the menus and make the meals far healthier, items like jam, marmalade and honey will be banned from the breakfast table, chips restricted to a once-a-week treat and salad dressing kept to nothing more than a "drizzle."

And no more crisps, chocolate, cake and biscuits, guys. These items are now banned and will not be paid for as part of the programme.

And these are all neccassary measure is school meals are to meet the healthy eating tests from now on, according to the Independent.

The new School Meals programme, which will distribute breakfast, lunch, snacks and dinners to thousands of pupils across the country, was launched this week by Health Minister Simon Harris, Education Minister Richard Bruton and Social Protection Minister Regina Doherty, who explained that while we are seeing declines in obesity levels among seven-year-olds in Ireland in general, this postive trend is not seen in children from poorer backgrounds.

"I know that this simple measure will have a huge impact on the health and wellbeing of many children and their families across Ireland, " Harris explained, while Bruton thinks we will see improvements in learning skills too once the programme is implemented. 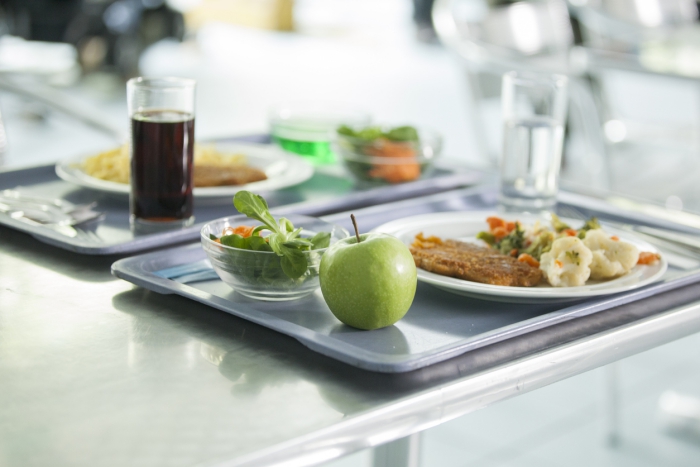 All schools which provide food to children are urged to adopt the updated nutrition guide, which sets out pretty strict guidelines for what a healthy day on a plate looks like. A typical breakfast could include a bowl of low-sugar,

For instance, a typical breakfast could include a bowl of low-sugar, high-fibre wholemeal or wholegrain breakfast cereal or bread. This could be accompanied by fruit or a glass of milk, or yogurt or cheese. Breakfast cereal bars cannot be served as a substitute for a bowl of cereal, and white bread will not be banned, but limited to once a week.

Portion control will also be of importance, with guidelines for how much of any given food should be served up at each meal. Salt will be restricted and snacks should always contain one serving of vegetables and fruit.

Sausages, chicken nuggets and rashers can still make an appearance, but will also be limited to once a week, and pizza must have a wholemeal base and served with a side salad.

popular
Totally tropical baby names inspired by Hawaii
4 ways to fix hard slime with ingredients you probably already have at home
These 5 Foods Could Increase Your Chances of Having Twins
Born in 2020: The baby names experts predict will reign supreme in the new year
BREAKING: Schools are unlikely to open fully before St. Patrick's Day
'Soak it all in' – the words on enjoying time with your kids that will hit you hard
20 Unisex Irish Baby Names That Are Absolutely Magical
You may also like
1 day ago
BREAKING: Schools are unlikely to open fully before St. Patrick's Day
3 days ago
Covid restrictions to last "well into February," says Coveney
4 days ago
Josepha Madigan compares issues around schools reopening to Mother and Baby Homes
5 days ago
New weather warning issued as Storm Christophe passes over Ireland
5 days ago
INTO asks government to reconsider limited reopening of schools due to "grave safety concerns"
6 days ago
Wicklow woman walks one million steps for intellectual disabilities charity
Next Page