Parents are divided over dad's punishment for 'bully' son

Parents are divided over this dad's punishment for his "bully" son who was told he could not ride the school bus anymore due to his behaviour.

Bryan Thornhill made his 10-year-old son run to school in the rain for one week after he found out that he had been taunting other students.

Thornhill also posted a video of the punishment on Facebook.

It has been viewed over 1.7 million times.

Fox New reports that Thornhill said that his son had to be "held accountable" for his actions.

He also said that his son had been "out of his mind" and that here was an example of "good parenting."

"The energy used up this week has actually gave him great reports at school and it has made him thankful to have a ride to school in the future."

Some people commended Thornhill on his punishment, saying that he had done a good job of disciplining his child.

"Our kids play football in the rain so why not it’s not hurting him at all good job," said one user.

"Good job, but tell him he's on the wrong side of the road," said another. 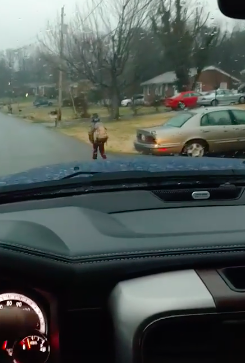 Others, however, thought that the dad's punishment was too harsh and that he had become the bully in the situation.

"So bully your kid to teach him not to bully lol," wrote one person. "Have you ever looked the kid in the face and had a long conversation with him about why he is acting the way he is acting?"

Thornhill responded and said that yes, he had done this and that his son was learning to work on his "impulsive choices."

He also added that he loves attention which is why he tends to act out.

So, what do you think - harsh or fair?

popular
Smyths issues warning to parents ahead of Christmas
Breaking is the haunting novel parents need to read this October
Coco Austin comes under fire for bathing daughter (6) in sink
Riverdale actor Ryan Grantham charged with murder of his mother
Gardaí appealing for witnesses following fatal road traffic collision on M7
Lynn Egar will appear in court next week after being charged with murder of children
Here's everything coming to Netflix this October
You may also like
4 months ago
Young boy loses his fingers in bullying incident at Welsh school
4 months ago
6-year-old boy left "scarred for life" after bullies allegedly set him on fire in US
5 months ago
The Mothership: What to do if your child is being bullied
5 months ago
Teacher uses two apples to show her students the effects of bullying
9 months ago
France approves proposed law to criminalise school bullying which could see bullies jailed
10 months ago
Mum shocked to find hickeys on bullied 6-year-old's neck after school
Next Page