There is no denying that having good friends is important.

Good friends are our safety nets, our support systems, our cheerleaders, our navigation system – and often become such a big part of our lives that they are practically family.

But did you know you childhood and teenage friendships actually serves another purpose?

So if you are worried about your teens or tweens spending too much time with their friends right now – know this: This might just matter in the future, when they meet partners and get married.

According to new research, there is a strong correlation between teen friendships and healthy romantic relationships later on in life.

Unsurprisingly, maybe, what they found, was  that those teens who had healthy relationships with peers of their own gender were also more likely to be satisfied with their romantic relationships by the time they were 27 to 30. 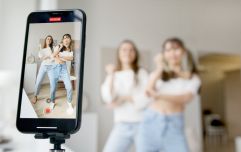 81% of parents support their kids’ dreams of becoming an influencer

END_OF_DOCUMENT_TOKEN_TO_BE_REPLACED

This is what professor of psychology at the University of Virginia and the lead author of the study, Joseph P. Allen, had to say:

"In spite of the emphasis teens put on adolescent romantic relationships, they turn out not to be the most important predictor of future romantic success," Allen said.

"Instead, it's the skills learned in friendships with peers of the same gender — skills such as stability, assertiveness, intimacy, and social competence — that correspond most closely to the skills needed for success in adult romantic relationships."

What does this mean for us? Nourish their friendships. Help them make good friends. Let your house be the open, warm and welcoming house, where the kids always feel the can bring their friends to. You might just end up thanking yourself for all this later.


popular
Man reveals he spent an hour trying to save Irish girl (7) in Majorca
Get ready! Casa Amor is happening sooner than you think
Tipperary tragedy: Eldery man died from natural causes
Mum gets the fright of her life after cheap tea-lights set house on fire
Justice Minister Helen McEntee pregnant with baby #2
Patrick Kriegel couldn't cope with the loss of his daughter Ana
Ryan Tubridy has moving reunion with Toy Show star Saoirse Ruane
You may also like
2 hours ago
Looking after grandkids can add 5 years to grandparents' lives
2 weeks ago
New parents will have more than 2,500 arguments in the first year of their baby’s life
3 weeks ago
Confession: I am raising a real mummy's boy – but this is good news, apparently
1 month ago
Apparently, dads spend 7 hours a year in the bathroom – hiding from their families
1 month ago
’Substantial’ number of new mothers experience anxiety, depression and stress
1 month ago
Children spend a quarter of their time in class just daydreaming, new research shows
Next Page