Hilaria Baldwin says Alec "shushed" her when she was in labour

That's basically a declaration of war...

Hilaria Baldwin has revealed some less-than-flattering home truths about her husband's support while she was in labour.

Reposting an article headline that read "When my husband told me to shush during labour I knew our marriage was over," Hilaria opened up about the birth of one of the couple's six children together.

"Alec shushed me while I was in labor with Rafa," she captioned the screenshot. "He was on the phone – 'Shush! Can you keep it down?'"

Hilaria revealed that the minute it came out of the actor's mouth, "he realised he sounded like an ass and he cowered".

END_OF_DOCUMENT_TOKEN_TO_BE_REPLACED

Unlike the woman in the article she reposted, the mum joked she "kept the marriage" and "went on to have 522 babies after", only letting him in after she's had the epidural.

Alongside a devil emoji and an evil laugh gif, she concluded: "I'll spare you the details of my reaction for now. But it never happened again."

We should feckin' hope not. 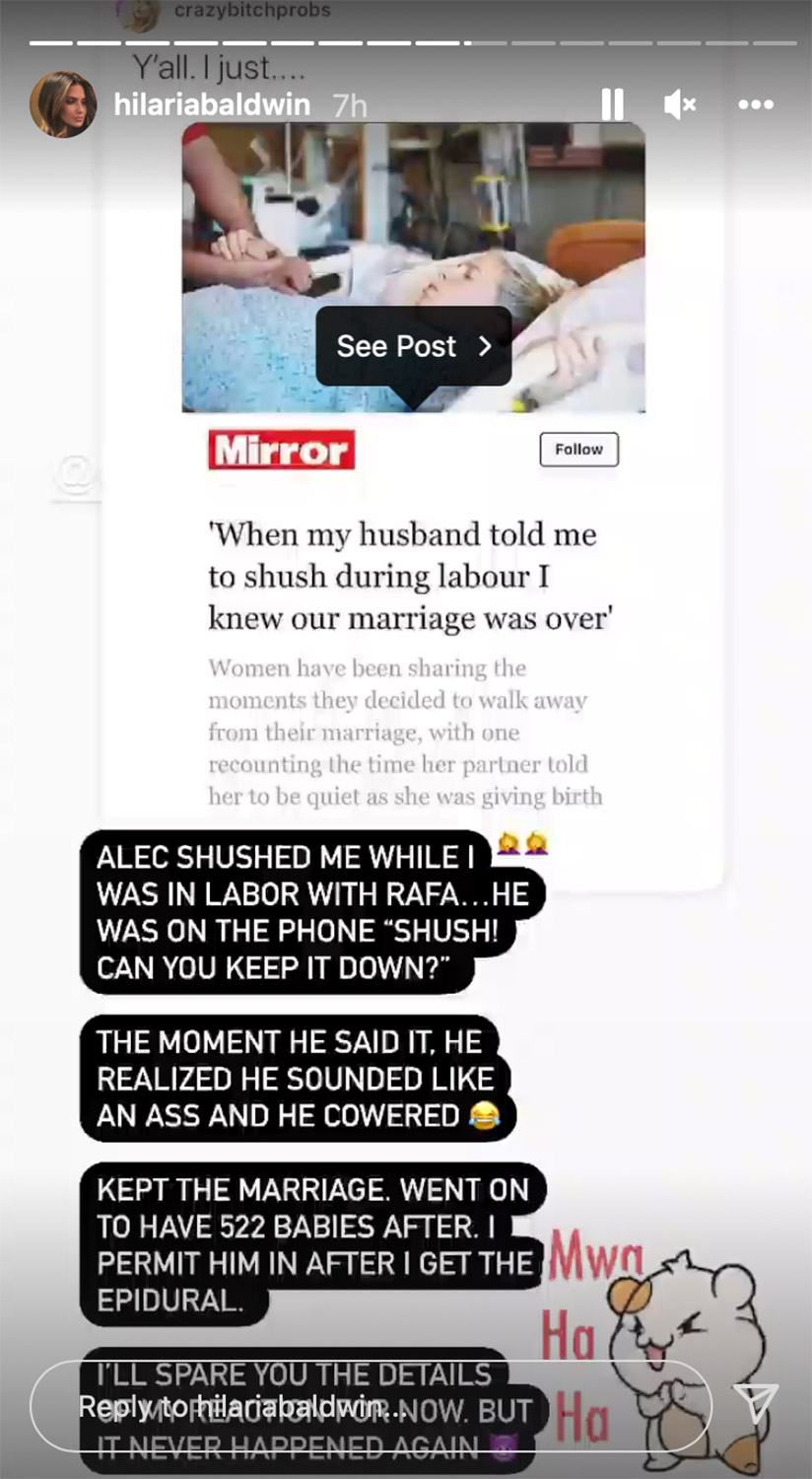 popular
Bride asks for divorce day after wedding following groom's disrespectful cake stunt
Students given £500 after uni was unable to give them their degree certificates at graduation
Entrepreneur schoolboy has made £1,000 from selling sweets
Police believe they know what happened to missing dog walker Nicola Bulley
Parents believe CoComelon causes tantrums and speech delays in toddlers
Going on solo holidays is good for mothers, science says
Dad admits he hates his daughter's name so much it makes him uncomfortable
You may also like
4 months ago
Gigi Hadid's dad addresses those Leonardo DiCaprio dating rumours
5 months ago
Leonardo DiCaprio and Camila Morrone have broken up
5 months ago
Vogue Williams faces backlash after admitting she only wears clothes once
5 months ago
Gilmore Girls star Alexis Bledel splits from husband of 8 years
5 months ago
Mrs Hinch opens up about being Stacey Solomon's bridesmaid
6 months ago
Victoria Beckham reveals why she is 'terrified' of Harper using social media
Next Page