Jorgie Porter is reportedly returning to Hollyoaks to celebrate the soap's 25th anniversary.

The 32-year-old is said to be reprising her role as Theresa McQueen, four years after leaving the soap.

"Jorgie is excited about the comeback and can’t wait to get her teeth back into her favourite role," an insider told The Sun."Bosses were keen to resurrect one of its most popular characters to draw in original viewers."

Jorgie first joined Hollyoaks in 2008, where she appeared on the soap until 2013. After a brief break, she returned to Hollyoaks in 2014 before leaving again in 2016.

She has also appeared  on Dancing on Ice, I'm A Celebrity...Get Me Out Of Here! and Celebs Go Dating. 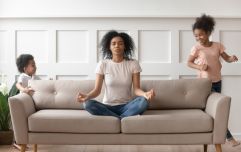 Lockdown with the kids: 8 thoughts every mum has had during isolation

END_OF_DOCUMENT_TOKEN_TO_BE_REPLACED

The news comes as Hollyoaks bosses confirmed production on the E4 soap has been stopped amid the coronavirus pandemic.

"Dear #Hollyoaks viewers. It is with a heavy heart that we have made the decision to pause filming of Hollyoaks," they said on Twitter.

"From Monday 30th March, we will be reducing the number of our weekly new episodes from five down to three, which will air Monday to Wednesday. To make sure we stay on air every week night, fans can look forward to extra special episodes every Thursday and Friday on E4.

"We will remain as present as ever on our social platforms so please keep in touch with us here, stay safe and take care of yourselves. Thank you for your ongoing support."


popular
Hospital bag essential - mum shares 'Pad-sicles' hack all expectant mums need
Win a complete Eucerin anti-pigmentation bundle for you and your mum
Are you the middle child? It could mean that you're the best friend to have
5 great pumpkin patches around Ireland to bring the kids to this month
The beautiful poem that sums up how all brand new mums are feeling right now
Lucy Nagle and Pippa O’Connor Ormond launch the most amazing joint fashion collection
Can you pronouce these 7 'unique' baby names? They're trickier than you think
You may also like
7 months ago
Hollyoaks star Lucy-Jo Hudson has welcomed a son with boyfriend Lewis Devine
1 year ago
Asan N'jie's Emmerdale contract terminated after incident at TV Choice Awards
1 year ago
Hollyoaks' Luke Jerdy and Daisy Wood-Davis are engaged, and the ring is very unusual
1 year ago
Hollyoaks star Kirsty-Leigh Porter has opened up about tragically losing her baby daughter
1 year ago
Hollyoaks star Kirsty-Leigh Porter announces stillbirth of daughter
2 years ago
Hollyoaks fans shocked as soap airs intense murder scene
Next Page