Jacqueline Jossa has sent fans into a frenzy after she appeared to hint at an EastEnders return.

The 27-year-old - who played Lauren Branning - left the soap in 2018. Taking to Instagram on Friday, she shared a series of photos from her time in Albert Square - and seemed to hint fans may see Lauren again.

"HAPPY 35th @bbceastenders," she wrote in the caption. "I had such an amazing time and LOVED Lauren Branning with ALL of my heart! I miss you lozza, maybe see you again one day!"

She also sent her congratulations to everyone who was involved in the recent milestone week of episodes.

EastEnders marked its 35th anniversary with a dramatic series of episodes, which saw a number of characters' lives hanging in the balance after a dramatic boat crash.

"Amazing week of eps congrats everyone involved," she added. 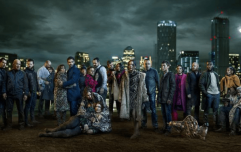 EastEnders has confirmed who died in the boat crash

END_OF_DOCUMENT_TOKEN_TO_BE_REPLACED

And it seems like her fans are definitely into the idea of Jacqueline returning to Albert Square.

"You have to come back especially now Peter is too," one person said.

"Everything you said and did was done in a way that made Lauren so believable. You absolutely owned that character," another fan added.

"Miss you being on EastEnders," someone else commented, while a different person said: "Oh I'd LOVE for you to come back, Lauren is such an iconic character."