PEOPLE report that the Duke and  Duchess of Cambridge have hired David Watkins to work on their Kensington Royal social media accounts.

He previously worked with the Sussexes, who stepped back from their roles as senior royals last week - and said farewell to their @sussexroyal account with a final post.

It isn't clear when Watkins began working for the Cambridges. However, his LinkedIn account seemingly confirms the move.

It comes as the Duke and Duchess of Cambridge recently surprised students and teachers at Casterton Primary Academy via a video call.

The royal couple spoke to the students about what they've been getting up to over the last few weeks - and thanked staff "for their hard work and dedication - and to wish the children a very Happy Easter". 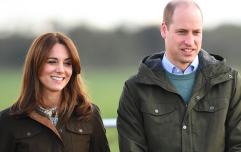 END_OF_DOCUMENT_TOKEN_TO_BE_REPLACED

As they started signing off, the couple briefly shared their Easter plans with the staff (as well as their followers).

"There will be a lot of chocolate being eaten here, don't worry," William said, before Kate jokingly replied: "You keep eating it!"


popular
40 gorgeous baby names predicted to be trending in the next decade
Arlo, Luna, Cora: 20 baby names from 2020 we are still madly in love with
RTÉ are introducing new educational programmes aimed at those sitting their Junior- and Leaving Certs
These 5 Foods Could Increase Your Chances of Having Twins
Cardigans are having a major moment – and here are a few I have in my virtual carts right now
Stacey Solomon was trolled for her boys having three different dads – and here is her response
Lockdown decluttering: 11 things you can safely throw out from your home today
You may also like
3 days ago
Happy birthday, mummy! How George, Charlotte and Louis threw Kate a lockdown party
1 month ago
Kate Middleton and Prince William's dog, Lupo, has passed away
2 months ago
Dress worn by Kate Middleton while visiting Ireland named 'Dress of the Decade'
5 months ago
The dress Kate Middleton just wore is available in the M&S sale right now
6 months ago
Prince Louis is over social distancing, says Kate Middleton – and we feel him
6 months ago
The parenting trick the Duchess of Cambridge swears by when George or Charlotte misbehave
Next Page