Prince Harry and Prince William's relationship has "forever changed" after his exit as a senior royal, according to a royal insider.

In January, Prince Harry and Meghan Markle announced that "after many months of reflection and internal discussions", they would be making a transition this year - and intended to step back as 'senior' members of the royal family (you can read their full statement here).

This will be effective at the end of March.

The Duke and Duchess of Sussex have since relocated to Canada with their ten-month-old son Archie - although they made a brief return to the UK recently for a final round of royal engagements.

Following the Sussex's final round of royal engagements, a royal insider has said that the relationship between Prince William and Prince Harry has "forever changed." 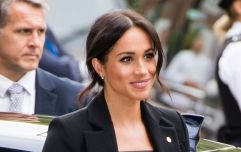 END_OF_DOCUMENT_TOKEN_TO_BE_REPLACED

“They won’t get back to the way they were. Harry is looking straight ahead at his future with his family," they added to PEOPLE.

The source noted that Meghan and Harry are planning to spend time in California with their young son Archie, and that Harry is "not looking back".

During their recent time in the UK, Meghan provided a rare update on baby Archie - who stayed home in Canada with a nanny.

At their appearance at the Endeavour Fund Awards in London earlier this month, Meghan gave a fellow attendee an update on how 10-month-old Archie - who is being looked after by his nanny in Canada - is doing.

"She said 'oh yes, well he is ten months now and is into everything,'" Claire Spencer recalled to Hello! of her conversation with the Duchess of Sussex.


popular
Mini Bella Boutique is running a huge online clearance sale as it sadly closes
Attention parents and kids! Here are 3 simple but scrumptious recipes to keep you busy all afternoon
Kim Kardashian says lockdown has made her realise she doesn't want more kids
Dad hides coronavirus symptoms from hospital staff in order to see newborn
David Beckham shared his dinner on social media and we really wish he hadn't
How to potty train your toddler in three days, according to the experts
Due in 2020? These baby girl names are sure to be popular in the coming months
You may also like
1 day ago
Insider shares update on how baby Archie is adjusting to life in California
4 days ago
'You've been great' It looks like Harry and Meghan just shared their final Instagram post
2 weeks ago
'These are uncertain times' Prince Harry and Meghan Markle release a statement on Covid-19
3 weeks ago
What Prince William said to Prince Harry at his last royal public appearance, according to a lip reader
4 weeks ago
Meghan Markle has made her first public appearance since stepping back as senior royal
1 month ago
Prince Harry and Meghan Markle to attend Princess Beatrice's wedding despite 'snub' reports
Next Page