More than one million social welfare recipients will collect their Christmas bonus this week, with pensioners, people with disabilities, carers, lone parents and the long-term unemployed among those to collect payments amounting to €221m.

According to the Department of Social Protection, the bonus, which was abolished by the previous government but is being paid at a rate of 85 per cent this year, will be be collected by 590,000 pensioners and 620,000 other welfare recipients.

“I’m very pleased that the Christmas Bonus is being paid again this year. It’s an important payment in the run-up to the festive season, and I’m especially pleased that we have been able to pay it at a rate of 85% of the benefit.

This is the highest level of payment since the bonus was abolished by the previous Government.

“The most important impact of the Christmas Bonus is for the recipients. But it also represents a significant boost for local economies with an additional €221 million being made available," he added.

You can check the full rates of Christmas bonus payments below. 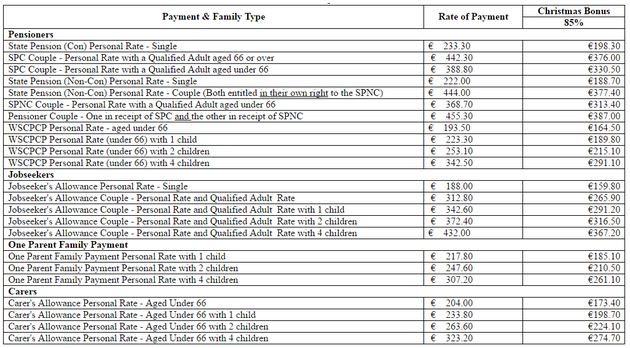 Do you think the 85 per cent Christmas bonus is enough for struggling welfare recipients? Let us know on Twitter @HerFamilydotie.