My ex daughter-in-law has been leaving her 8-year-old home alone- is this wrong?

Is 8 too young to be left at home alone?

A concerned grandparent has found out that their ex-daughter-in-law has been leaving her 8-year-old daughter home alone.

The mum leaves her little girl at home when she "nips" to the shop. However, the grandmother revealed sometimes she can be gone for as long as an hour.

She told Mumsnet, "When I brought up my concern to my son he said that he was fine with it, granddaughter is quite mature for her age, I suppose.

"He said that ex DIL had spoken to her about what to do in an emergency/ to not answer the door etc. She has a snib on the door so whilst granddaughter is locked in she can very easily get out."

The mother calls her daughter to check-in, but that hasn't eased the grandmother's worries.

We all know accidents can happen so quickly. Something drastic can happen in a split second, never mind in the space of an hour.

"It just doesn't sit right with me." 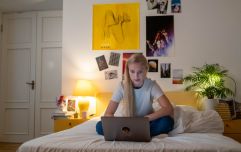 END_OF_DOCUMENT_TOKEN_TO_BE_REPLACED

"My son says he's fine about it. I feel like there isn't much I can do."

The grandmother said she is particularly concerned about a fire breaking out. "My son says she knows what to do but she is 8 years old! Of course, she doesn't know what to do!"

Many users understood her concerns but said there was little she could do if both of the girl's parents had no issue with it.

One said, "I don't see an issue with leaving an 8yo home alone for short periods, tbh. I remember being left at that age."

Another suggested, "If you’re concerned you could always say that she can drop her around to yours if she needs to go shopping or anything."


popular
Inside Prince William and Kate's beautiful new home in Windsor
Here's where you can get the best deals on all your Back to School essentials
Baby clothes from Shein and AliExpress have dangerous levels of harmful chemicals
Musings: Stop saying my partner is 'minding' our kids – he's parenting them
The most adorable little Christmas jumpers are in Penneys right now
Voluntary contribution fee should be fully scrapped, National Parents' Council says
TikTok star shows how to avoid sweat stains by using pantyliners
You may also like
6 months ago
Is it okay to leave my 7-year-old son home alone?
7 months ago
Six questions I have about Home Alone after re-watching it as an adult
8 months ago
You can now stay in the house from Home Alone
11 months ago
We finally have a release date for the Home Alone reboot
1 year ago
QUIZ: How well do you really remember Home Alone?
1 year ago
Retro Drive in Movies announces Drive In panto and movie line up
Next Page