"I'm just an ordinary person who has happened to end up on the cover of Vogue."

Rachel Miller, 24, from Coagh in Tyrone was given the shock of her life when she was called up and was told that she was going to be featured on the front cover of Vogue.

Rachel has been working at Homerton Hospital in east London for almost three years now and was chosen as one of three key workers to feature on the front of the magazine this month.

There were three separate editions of Vogue published for their July edition, each featuring a different key worker who has been working throughout the Coronavirus pandemic.

Narguis Horsford, a train driver on the London Overground, and Anisa Omar, a supermarket worker in King's Cross, were the two other women chosen to front the Vogue July edition covers.

"I can think of a no more appropriate trio of women to represent the millions of people in the UK who, at the height of the pandemic, in the face of dangers large and small, put on their uniforms and work clothes and went to help people." 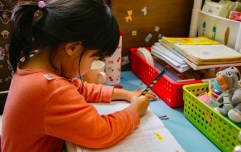 Breaking: Junior and senior infants may return to school on March 1

END_OF_DOCUMENT_TOKEN_TO_BE_REPLACED

Speaking to ITV, Rachel Miller described Vogue coming to the hospital where she works:

"I was just doing a normal shift on the labour ward and I came out of the room to get something and there was a photographer from Vogue there who took portraits of everyone on shift day. So at the time I didn't know it was going to be on the cover, but I found out a couple of weeks later that they had picked my portrait to be one of them."

She also expressed her delight that key workers other than hospital staff are also getting the recognition that they deserve:

"The fact that the other two girls are on there is really great, because over the past few months the NHS has got so much love and encouragement from the public. I think maybe other key workers whose jobs have been overlooked in the past, they now have this recognition and they deserve it."

We're delighted for all of them.


popular
PICS: Three arrested following street party in Limerick
The free BabyDoc Box is available once more but only for a very limited period
Hilaria and Alec Baldwin have welcomed baby No. 6 — five months after baby No. 5
Top Tips On How To Recover And Refuel Your Body After Miscarriage
Can you pronouce these 7 'unique' baby names? They're trickier than you think
8 Pros And Cons Of Living Back With The Grandparents
Pregnant pause: Pre-labour can last days, here's 9 tips to help you through
You may also like
2 weeks ago
'Invisible painting' is the cool indoor activity that'll entertain your kids for a solid 30 minutes
1 month ago
Exhausted keeping up with your kids' constant snack requests? The ONE tip that helped me
1 month ago
Level 5 life: 3 things I am doing to help diffuse sibling fights
1 month ago
Level 5: 10 really cool colouring pages to print and colour in from Pinterest
1 month ago
Children have "borne the brunt" of Covid pandemic, new research has found
1 month ago
Four members of single family die of Covid-19 in UK after Christmas rules relaxation
Next Page