All students, including sixth years, will return to remote learning

The Government has gone back on its decision.

All students, including sixth years, will return to remote learning, it has been confirmed.

Minister for Education Norma Foley confirmed the news the day after it was announced that Leaving Cert students would be in three days per week.

In a statement released on Thursday night, Foley said: "It is with regret that I announce that, despite the confirmation by Public Health that schools remain safe, that children in special schools and special classes and Leaving Certificate students will not be extended in-person learning.

"I also felt it was the right thing to extend in-class teaching to our Leaving Certificate students who are approaching a crucial time in their exam year.

"Unfortunately I am left with no alternative but to pause the limited reopening on Monday to allow further engagement with all education stakeholders." 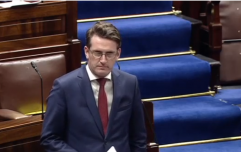 END_OF_DOCUMENT_TOKEN_TO_BE_REPLACED

The Department of Education also released a statement, where it said that "Closing schools has hugely adverse consequences at individual, family and societal level.

"For children, it impacts on wellbeing, learning, on social and emotional development."

Earlier on Thursday, The Association of Secondary Teachers Ireland (ASTI) directed its members to teach remotely, and not to go into schools three days a week.


popular
Totally tropical baby names inspired by Hawaii
These 5 Foods Could Increase Your Chances of Having Twins
4 ways to fix hard slime with ingredients you probably already have at home
20 Unisex Irish Baby Names That Are Absolutely Magical
Gigi Hadid reveals name of her and Zayn Malik's daughter
Can you pronouce these 7 'unique' baby names? They're trickier than you think
"She's already changed our world" Gigi Hadid and Zayn Malik welcome baby girl
You may also like
1 week ago
Aldi to create 1,050 new jobs in Ireland in 2021
2 weeks ago
Met Éireann issues ice warning as temperatures set to plummet overnight
2 weeks ago
Taoiseach all but confirms schools will remain closed until January 31
2 weeks ago
‘Sudden Stratospheric Warming Event’ forecast for Ireland early this month
2 weeks ago
Snow and temperatures as low as -4 on the way as freezing start to 2021 continues
1 month ago
Gardaí issue warning over "ghosting" social media trend after girl hospitalised in Limerick
Next Page