The singer said thank u, next to single life last week

Ariana Grande has publicly acknowledged her wedding for the first time by sharing gorgeous photos of the ceremony.

The hitmaker's rep confirmed last week that she and real estate agent Dalton Gomez married in an intimate ceremony on Saturday, May 15.

The couple said "I Do" at their home in Montecito, California, underneath flowers suspended from the ceiling. Ariana shared some snaps of the event on her Instagram.

Wearing a custom silk Vera Wang gown, she made for a stunning bride. According to Vogue, the designer made a pact with Ariana at the Met Gala a few years ago that she would one day design her wedding dress. 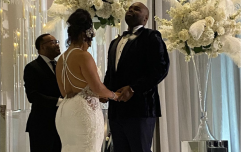 END_OF_DOCUMENT_TOKEN_TO_BE_REPLACED

As per the lyrics of 'thank u, next' ("One day I’ll walk down the aisle/Holding hands with my mama"), the singer was given away by mam Joan Grande – but alongside her dad, Ed Butera.

Ariana announced her engagement to the 25-year-old real estate agent in December on Instagram. The pair began dating in January 2020 and spent the pandemic in quarantine together at her LA home, with Dalton appearing in the music video for her single with Justin Bieber, 'Stuck with U'.

More behind-the-scenes pictures of the wedding can be viewed on Vogue.

popular
This is everything women need to know about ovarian cysts
Expert says Cocomelon acts "as a drug" to kids' brains
Bride asks for divorce day after wedding following groom's disrespectful cake stunt
These 40 baby names are set to trend in 2023
Police believe they know what happened to missing dog walker Nicola Bulley
Babies born in February have some pretty cool advantages – no, really – it's true
Shows like Bluey and Peppa Pig are actually bad for kids, expert warns
You may also like
6 months ago
Stacey Solomon shares first video from magical wedding to Joe Swash
6 months ago
Stacey Solomon and Joe Swash tie the knot at Pickle Cottage
8 months ago
Kourtney Kardashian and Travis Barker officially tie the knot
1 year ago
Have Stacey Solomon and Joe Swash have secretly tied the knot?
1 year ago
Emma Bunton marries partner Jade Jones in secret wedding
1 year ago
Brian McFadden pushes wedding out another year
Next Page