"What's the point of anyone doing this"

Ben Foden's wife Jackie has gone on quite the intense rant after he was booted off Dancing On Ice.

Rugby player Ben became the first contestant to be eliminated over the weekend.

Jackie slammed the show following the results and said it was "unfair" and "pointless".

She claims the show is nothing but a popularity contest.

"What's the point of saying it's a skate competition when it's really just a popularity competition. Why divide the skaters into two weeks, groups of your choosing, and why not judge all their scores together?"

"What is the point of getting a bunch of people together and then not judging them all together?" she asked.

Jackie was furious over Ben's departure because apparently, he wasn't the "worst skater" of the bunch. 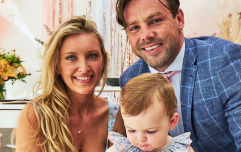 END_OF_DOCUMENT_TOKEN_TO_BE_REPLACED

"And what's the point of having a judging panel when it's all down to a public vote? It's a popularity competition."

"What's the point of anyone doing this, trying to practice and learn, if you're just going to be judged on your popularity?"

"It's a bit unfair, and we're just a bit sad the worst skater wasn't the first to go.

She said she understands the public vote is how the show makes money, but felt it was unfair.

"It's just kind of pointless to even try," she claimed.

Despite her frustration, she praised Ben for doing his best.

"I'm so, so proud of you, Benny. You are a beautiful person inside and out. I'm so proud of how far you pushed yourself. I knew you'd put your heart and soul into this show.

"I wish I got to see you develop even more," she added.


popular
Meghan Markle visits Texas school shooting memorial
The reason why mums wake up when babies cry and dads stay asleep is interesting
Doctor warns women not to follow Kourtney Kardashian's fertility advice
"Back where she belongs": Saoirse Ruane leaves hospital after 9 days
9 of the best outdoor family experiences in Ireland's Ancient East
Bridgerton star reveals she has been hospitalised with mental health issues
Husband of Texas shooting victim Irma Garcia dies of fatal heart attack
You may also like
4 months ago
Ben Foden clears up those Rachel Stevens remarks
4 months ago
Ben Foden's wife Jackie claims it is "not possible" for him to cheat on her
4 months ago
Ben Foden admits re-marrying so quickly was unfair on Una Healy
4 months ago
Ben Foden speaks out about the "things he put Una through"
10 months ago
Una Healy’s kids blocked from travelling to the States with their dad’s new wife
2 years ago
Ben Foden and his wife Jackie are 'expecting their first child together'
Next Page