The sportswoman will be back in action at Ballinrobe Race Course tonight for the first time since giving birth to her daughter Rosie in May.

"I'm really looking forward to getting back into action," she said.

Thank u for all the well wishes looking forward to getting back😊 Rosie s very excited pic.twitter.com/xgb3RnBVBs 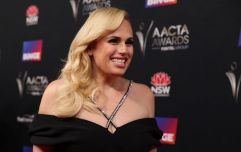 END_OF_DOCUMENT_TOKEN_TO_BE_REPLACED

As an amateur jockey, Nina, 33, has had plenty of success in the National Hunt sphere.

She's had four wins at Cheltenham in the cross-country chase and rode Organisedconfusion to victory in the the Irish Grand National in 2011, becoming the second female rider ever to win he race.

Nina is the daughter of legendary jockey Tony Carberry and is married to Ted Walsh Junior, brother of Ruby Walsh.

Rosie is the couple's first child.

popular
This is everything women need to know about ovarian cysts
Expert says Cocomelon acts "as a drug" to kids' brains
Bride asks for divorce day after wedding following groom's disrespectful cake stunt
These 40 baby names are set to trend in 2023
Police believe they know what happened to missing dog walker Nicola Bulley
Babies born in February have some pretty cool advantages – no, really – it's true
Shows like Bluey and Peppa Pig are actually bad for kids, expert warns
You may also like
2 weeks ago
Giving birth takes a bigger toll on your body than running a full marathon
1 month ago
Lack of sleep can add up to seven years to women's biological age
7 months ago
Opinion: The obsession with routines and sleep training for babies is weird – and stressful
8 months ago
The reason why mums wake up when babies cry and dads stay asleep is interesting
9 months ago
First ever mother and baby mental health unit to open in 2024
10 months ago
One mum's emotional post about the effects of mum-shaming will stay with you
Next Page