Ladies, we have some pretty exciting news.

It looks like we're getting some new music from the gorgeous Cheryl!

Back in January, Cheryl opened up about how she was working on new music, and she was hoping to release it "March-ish" time.

Obviously, that didn't happen, but at least now we might have a date.

She posted a snap of herself on Instagram yesterday, and captioned it:

"When she says March-ish but might have meant May ... (if you know you know)."

Fans obviously reacted with excitement (and some slight frustration at the delay!) 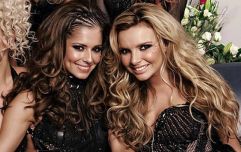 Nadine Coyle is going to be on I’m A Celebrity, and Cheryl is worried

END_OF_DOCUMENT_TOKEN_TO_BE_REPLACED

"Next single was supposed to be out in March... Looks like it's May when it will be released," wrote one fan.

Another commented: "SO READY FOR IT!"

"Please be the beginning of May! Be great to have a new summer banger to dance to," said another mega fan.

You may or may not recall Cheryl's last comeback, which involved that strange hand-licking fiasco.

Cheryl performed her single on X Factor, and people were less than impressed.

In fact, people were pretty damn mean about the whole thing.

"Surprised Cheryl isn’t miming, but to be honest she’d be better off doing that!" wrote one Twitter user.

"That high note she tried to hit completely cringed me out."

Another said: "Cheryl basically using the production, her moves etc to throw people off her ‘singing’. Should have just lip-synced. Terrible."

Well, we reckon may will be her time to shine!


popular
This amazing hanging egg chair is coming into Aldi next week and go, go go (but safely)!
President Michael D Higgins and Saoirse Ronan for final Late Late Show of the season
Breastfeeding: The amazing tip one midwife gave me on how to clear a clogged milk duct
Energia and GIY are giving away free grow boxes so you can start a vegetable patch with your kids
Super simple trick to keep paddling pool clean when your kid isn't using it
Totally tropical baby names inspired by Hawaii
The Dalkey house where Matt Damon stayed during lockdown will be available to rent again soon