Actress Zoe Lister-Jones has accused Chris Noth of being a sexual predator.

The actress said Noth was "sexually inappropriate" with a fellow female promoter at a New York club.

She worked at the club when she was in her twenties.

She also starred in an episode of Law and Order with Noth.

The actor would drink on set and behaved inappropriately in between filming.

Speaking about her experience, the actress shared, "Last week, my friend asked me how I felt about Mr. Big’s death on And Just Like That, and I said, honestly, I felt relieved."

She explained to her friend that she struggled to separate the actor from the man because he is "a sexual predator".

"My friend was alarmed at the word choice. And to be honest so was I," she shared.

Lister-Jones admitted she hadn't thought about Noth for years. 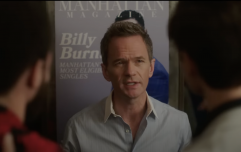 END_OF_DOCUMENT_TOKEN_TO_BE_REPLACED

"In my twenties, I worked at a club in NY that Chris Noth owned and on the few occasions he would show up, he was consistently sexually inappropriate with a fellow female promoter."

"That same year I was a guest star on Law and Order and it was his first episode returning as a detective after SATC [Sex and the City]."

"He was drunk on set. During my interrogation scene, he had 22 oz of beer under the table that he would drink in between takes."

She continued, "In one take, he got close to me, sniffed my neck, and whispered, “You smell good.” I didn’t say anything. My friend at the club never said anything. It’s so rare that we do."

"He was consistently sexually inappropriate with a fellow female promoter."

She said women are forced to learn how to handle these situations.

She ended her statement by writing: "F**k Mr. Big."

Two other women have accused Noth of sexual assault, but he stated the claims are "categorically false".

popular
"My heart sank": Tubridy hit with backlash over Toy Show remark
Woman gives birth to baby boy and girl less than 12 months apart
Parents told to stop buying selection boxes for kids- here's why
Having an Elf on the Shelf can actually be bad for your kids
"Losing a baby is the ultimate loss, but to watch on over a video call is soul destroying"
Third child dies from scarlet fever in UK- here are the symptoms to look out for
Mysterious clumps in Christmas tree should be removed immediately
You may also like
5 months ago
And Just Like That writers say Samantha Jones will feature in season 2
6 months ago
Sarah Jessica Parker speaks out about relationship Chris Noth after sexual assault allegations
9 months ago
Sarah Jessica Parker on Kim Cattrall's absence from AJLT: "Samantha is not gone"
9 months ago
Here's what Stanford Blatch's storyline was going to be in And Just Like That...
9 months ago
Sara Ramírez opens up about receiving "hate" for playing Che in And Just Like That...
9 months ago
SJP says she wouldn't be okay with Kim Cattrall appearing on 'And Just Like That...'
Next Page