It seems congratulations are in order for Leighton Meester and Adam Brody —as the couple welcomed their second child earlier this week.

The notoriously media-shy couple didn't announce the birth via their social channels or, indeed, anywhere, but it was actually Brody who let the cat out of the bag in a rather casual manner.

Meester's husband of six years joined Hold the Phone TV's The Fun Time Boys Game Night Spectacular earlier this week, alongside eight other contestants, to play trivia games. And according to the Daily Mail, at some point during the game, the 40-year-old confirmed that he and Meester recently welcomed their second child—a boy.

Someone mentioned that Brody has a new child, to which he responded, "I have a new...yeah, since last I played I have a new kid." He confirmed that his new baby is "a boy and he's a dream, he's a dream boy."

Meester, on the other hand, has not yet spoken publicly about her the arrival of her second baby, and instead kept her social media focused on promoting a t-shirt as part of her partnership with Feeding America – and charity that helps feed the hungry in the US.

Like my T-shirt? Hunger Action Month is underway and to show my support, I’m teaming up with @FeedingAmerica to highlight families in need. These inspirational T-shirts are just a reminder that when we come together, we can make an impact. This year, food banks across the country are facing increased demands because of the pandemic. You can make a difference this #HungerActionMonth. Take action with @FeedingAmerica to end hunger one helping at a time. www.FeedingAmerica.org/HAM 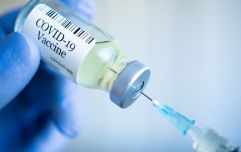 END_OF_DOCUMENT_TOKEN_TO_BE_REPLACED

The rumours about the Hollywood couple expecting another baby started back in spring, when Meester was spotted strolling around LA, dressed in a grey t-shirt and black overalls with her growing baby bump on full display.

Brody and Meester began dating in 2013 and got married a year later in February 2014. The couple welcomed daughter Arlo Day who in 2015.


popular
Two arrested after Dublin salon opens twice amid Level 5 restrictions
4 ways to fix hard slime with ingredients you probably already have at home
There's a reason why babies love to sleep with their bum in the air and it's adorable
Pregnant with Pelvic Girdle Pain? These Gentle Exercises Might Help
Can you pronouce these 7 'unique' baby names? They're trickier than you think
These 5 Foods Could Increase Your Chances of Having Twins
Top Tips On How To Recover And Refuel Your Body After Miscarriage
You may also like
1 day ago
Taoiseach Micheál Martin confirms Level 5 until April 5, with "three differences"
1 day ago
Stephen Donnelly clarifies comments on reopening of schools next week
3 days ago
"To me, that is quite an essential thing" – calls for shoe fittings for children to be deemed essential
4 days ago
We a cutie! Princess Eugenie shares first picture of her baby boy – AND reveals his name
5 days ago
It's over: Kim Kardashian files for divorce from Kanye West after weeks of speculation
6 days ago
40 years on the families of the Stardust victims are still seeking justice
Next Page