Dan Osborne has been reunited with his wife, and Queen of the Jungle, Jacqueline Jossa.

On Sunday evening, the Eastenders actress was named as the winner of I'm A Celeb, and has been enjoying a well deserved family holiday since.

The family have been spending a few days in the Palazzo Versace hotel on Australia's Gold Coast, and Dan has  been sharing some sweet pictures.

Captioning a snap of the moment that Jacqueline was reunited with her daughters after winning the ITV jungle show, Dan wrote shared how he feels to be with his wife again.

"What a moment & what a day. waking up with my wife this morning feels goooood!! The girls are so happy mummy’s back. Can’t wait for us to get back and see Teddy now!"

What a moment & what a day ❤️ waking up with my wife this morning feels goooood!! The girls are so happy mummy’s back ?❤️ can’t wait for us to get back and see Teddy now!❤️

Throughout Jacqueline's time in the jungle, rumours were circulating about Dan Osborne cheating, so it's good to see they're a family united.

Dan has posted a number of other cute pictures. 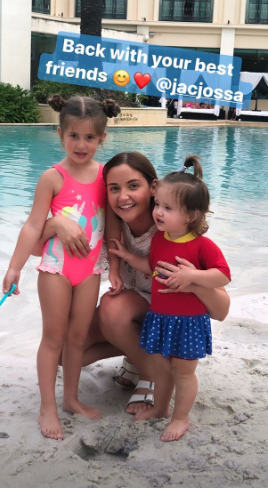 In the first snap, Dan wrote "Back with your best friends @jacjossa" over a gorgeous image of Jacqueline and her two daughters.

In a second pic, Jacqueline is seen carrying her youngest daughter on her back, with Dan captioning it: "Someone's has missed mummy @jacjossa".

popular
Kelsey speaks out about moving on after Tom Parker's harrowing death
7 Christmas markets and Santa experiences to visit with kids this winter
"Enhanced x-ray technology" being trailled at Dublin Airport could lead to removal of 100ml liquid rule
"I know it's scary": Westlife's Mark Feehily diagnosed with pneumonia
Boy seriously injured after alleged dog attack in Wexford
"I have been shaken": Kim Kardashian addresses Balenciaga's disturbing campaign
These 40 baby names are set to trend in 2023
You may also like
2 weeks ago
Olivia Attwood's first Instagram post after I'm A Celeb departure
2 weeks ago
I'm A Celeb fans all say same thing as Matt Hancock picked for eating trial with Boy George
2 weeks ago
Seann Walsh addresses Strictly kiss on I'm A Celeb
2 weeks ago
Mike Tindall ‘under investigation’ after breaking I'm a Celeb rules
2 weeks ago
Matt Hancock claims he's doing I'm A Celeb to engage with young people
2 weeks ago
Olivia Attwood's I'm A Celebrity exit finally explained
Next Page