Dancing with the Stars viewers have called out the judges for overmarking Suzanne Jackson.

The influencer opened the show on Sunday evening but messed up during her routine.

Despite messing up the routine, Suzanne and professional dancer Michael Danilczuk received 15 points from the judges.

Viewers slated the judges for scoring her so highly when her routine was full of errors.

One viewer wrote, "WHY oh WHY do they never critique Suzanne properly? She's been overmarked every week so far and when she blatantly gave up halfway through this week's routine the judges are super nice to her."

Another said, "I'm so cross! Arthur gave Kevin and Sue the same score. Suzanne forgot the majority of her steps."

The show has only just begun and we can barely stay in our seats after that ELECTRIC jive - 15 points for @SoSueMe_ie and Michael! #DWTSIrl pic.twitter.com/KWjY9OBJtg

"Feel very sorry for Suzanne, but I’m fuming for the rest of the contestants, with the score she received," another said. 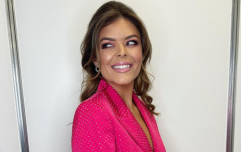 END_OF_DOCUMENT_TOKEN_TO_BE_REPLACED

She admitted she completely missed a beat during the routine which threw her off.

"What can I say? I missed a beat and that was it. I’m gutted with how tonight went, we put so much work into the dance, but I can’t thank you all enough for your kind words & support."

The businesswoman stressed that she didn't forget the routine, but simply missed a beat.

"I’m gutted, I didn’t forget the dance I missed a beat, I continued on as I could but I was so disappointed that happened."

"Thank you for your kind words and encouragement."

Suzanne Jackson explains why she signed up for DWTS

Suzanne Jackson steps down as CEO of SoSu Cosmetics

popular
Dunnes Stores launches stunning collection of Communion dresses
Emma Pattison: Tributes paid following death of head teacher and her family
Siblings kidnapped in March 2022 have been found alive
Former YouTube star Jim Chapman and wife Sarah expecting second child
Teenager killed in shark attack after swimming with dolphins in Australia
Adam Levine reveals gender of his and wife Behati Prinsloo's baby
Fiona Pender murder suspect could return to Ireland
You may also like
3 weeks ago
Suzanne Jackson originally wanted to present Dancing with the Stars
1 month ago
The Dancing With The Stars couples have been revealed
1 month ago
Derry Girls star is the latest to head onto Dancing With The Stars
2 months ago
Here are the first four people officially heading onto Dancing With The Stars
4 months ago
Doireann Garrihy confirmed as new Dancing with the Stars presenter
5 months ago
Westlife's Nicky Byrne has quit Dancing With The Stars
Next Page