My sister named her baby boy after my dead husband

How could she do this?

One woman is feeling conflicted after her sister revealed her baby's name.

She explained that her sister had just given birth to a baby five days ago. The woman is also pregnant with her late husband's baby.

She sadly lost her husband in the army just three months ago.

The mum-to-be shared, "I am 8 months pregnant with my first child, it's a boy. My husband Rodrigo died in the army 3 months ago."

The woman has been living with her family since her husband's tragic death.

She explained that she hated being alone and that her parents have been very supportive.

The heartbroken mum said they planned on naming their son Alex before her husband died.

"I am still going with the name Alex, but with Rodrigo as a middle name."

"My sister never discussed baby names with me or the family, she just always said she loves Hispanic names (we are white Americans, my husband was Mexican)." 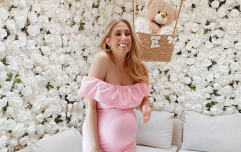 END_OF_DOCUMENT_TOKEN_TO_BE_REPLACED

"Yesterday she came back home with the baby and introduced us all to baby boy Rodrigo."

The woman understandably broke down in tears when she heard the name her sister chose.

"I told her that's really awful of her. My mother comforted me and told my sister she is way out of line with the name.

"Sister says I don't own the name, it's a common name where we live and I am going with Rodrigo as a middle name anyway, not a first, so it won't be a problem."

"I told my sister to just change the name to literally anything else."

The sister claimed she was being out of line for "changing her kid's identity" but we have to side with the mum here.

Her sister is being totally out of order by using her late husband's name.