Shocking exit polls released by NBC News have shown that women voted for Donald Trump to be the 45th President of the United States.

Although 73 percent of all female voters surveyed in the exit poll stated that they were "bothered" by Trump's reported treatment of women, Hillary Clinton has failed to win the support of her own gender – or white, middle-aged women to be precise. This demographic surged overwhelmingly for Trump, by 78 percent to Clinton’s 18 percent. 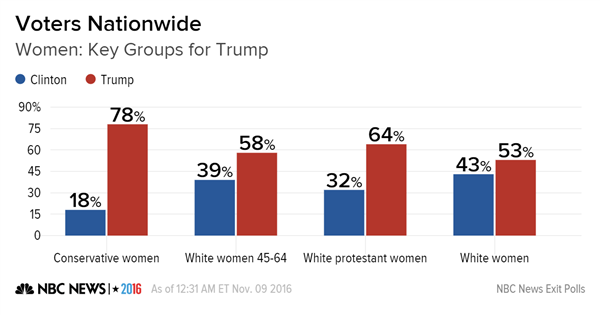 Feminists worldwide are scrambling for answers. How can a man who (allegedly) deliberately walked in on a fifteen year old beauty contestant when she was naked, who has admitted to groping women without their consent, who has made sexual remarks about his own daughter, who can be heard in a video stating that he’ll be "dating one of them in ten years" in reference to the group of ten-year-old girls he was looking at, who hates LGBTQ people, black people, immigrants, Muslims, and women have just won over women?

Hillary Clinton’s nomination and presidential bid appeared to be a huge step forward for women’s rights, but for which women? Feminist support for Clinton often centred around her policies on women's rights and, frequently, her stance on abortion rights. However, even loyal Clinton supporters (myself included) have to admit that her reputation as a defender of human rights is shaky at best. Her foreign policy, particularly with regards to the Middle East, is hard to package as women-friendly when Clinton-supported groups are killing women and their children in Gaza, Iraq, Afghanistan and Pakistan.

Of course, there are critiques of every potential President and Hillary was certainly open to a long list of them but I find it horrifying that we will watch a man, who has so appalled women worldwide with his behaviour, be sworn in as President next January. Should women have voted for Hillary just because she is a woman? No. Women should have voted for Hillary because she is not Donald Trump.

popular
Parents with different surnames are being asked to carry their child's birth cert to travel but is it legal?
Blake Lively slams paparazzi for sharing 'disturbing' images of her daughters
Young woman suffers "life-changing injuries" after being hit in face with firework in Galway
Imelda May furious over harmful "don't get spiked" message
Pippa O'Connor and Brian Ormond welcome their third child together
5 great pumpkin patches around Ireland to bring the kids to this month
DIY: How to transform your old trampoline into a super-cosy 'summer hideout'
You may also like
13 hours ago
Gardaí renew appeal for information on 35th anniversary of Philip Cairns disappearance
1 day ago
Cause of death of family who mysteriously died while hiking revealed
1 day ago
Irish families are asked to have fun while raising money for sick children this Halloween
2 days ago
Louis Walsh is holding auditions for teens to create new Boyband and Girlband
2 days ago
School Run News: Tony Holohan urges parents to stop sending symptomatic kids to school
2 days ago
14-year-old boys charged for allegedly launching lit firework at baby in pram
Next Page