The mum said their dog was always calm and placid.

A toddler has been brutally injured after her family dog attacked her.

The girl's parents were stunned when their "perfect" St. Bernard bit her.

Speaking about the horror attack, the girl's mum said she found her 1-year-old covered in blood.

Their dog tore through her skin and even ripped the young girl's lip in two.

Mené has been scarred after the incident.

It is believed their pet was usually calm and placid. The family dog had to be put down after the terrifying incident.

The mum said she was heartbroken, but it was the right thing to do.

She said she was shocked by the attack because their "perfect" dog was always so calm. 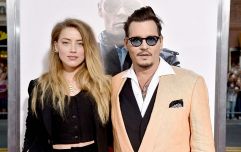 END_OF_DOCUMENT_TOKEN_TO_BE_REPLACED

The mum told The Mirror that the attack came out of nowhere.

However, the dog then lunged at the girl's father, which finalised their decision. They had no choice but to put the dog down.

She said it was a miracle that he didn't hit a major artery.

The mum said both she and her husband continue to have nightmares about the incident.

She also said she cannot help but think about what could have happened to her daughter.

The attack happened last August and left Mené with over 14 wounds.

Her mum said: "We’re thankful at the end of the day because it could have been so much more serious, but it’s been a hell of a rollercoaster.”

She has warned other parents to be wary of their own dogs because you just don't know what could happen.

popular
Emma Pattison made distressed call to sister before murder-suicide
Vogue Williams opens up about her divorce from Brian McFadden
Dunnes Stores launches stunning collection of Communion dresses
Siblings kidnapped in March 2022 have been found alive
Brendan Fraser blamed himself after son's autism diagnosis
Expert team end search for Nicola Bulley declaring she’s not in the water
Emma Pattison: Tributes paid following death of head teacher and her family
You may also like
1 year ago
Stacey Solomon admits she feels "sad and guilty" over death of beloved dog
1 year ago
Warning issued to children who have asked Santa for a pet this Christmas
1 year ago
New Colombian law gives workers two days off to mourn their pets
3 years ago
Penneys will soon sell €8 costumes for your dog and they're so PRECIOUS
3 years ago
Mother admits she wants a pet monkey, and everyone thinks it's ludicrous
3 years ago
You can now get a mermaid life jacket for your dog and we'll take seven
Next Page