Doireann Garrihy lost her beloved grandmother just days after her Dancing with the Stars debut.

The radio host told her followers that her funeral took place on Friday, January 13th.

Her funeral took place at St. Patrick's Church, New Quay, and was then followed by burial in Corcomroe Abbey.

She wrote, "We laid our nana Margaret to rest on Friday. A surreal few days of 'the show must go on."

"She absolutely loved her style and she loved to dance too," Doireann shared. 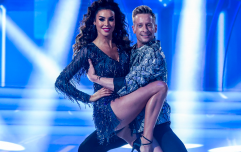 END_OF_DOCUMENT_TOKEN_TO_BE_REPLACED

Speaking about her new hosting gig, Doireann says she has been loving it so far.

The presenter has been praised for livening up the RTÉ series.

Doireann said working alongside Jennifer Zamparelli has been a dream.

She also said she will miss working on the show when it comes to an end.

She wrote, "Two shows done, nine to go and I already know I'll miss it.

"The most brilliant team on screen and behind the scenes, it's been an absolute joy so far to be part of such a super production and I can't wait for the rest of the run."

popular
Shock after baby is discovered alone in pram late at night in Dublin
HSE issues advice for parents if their child starts choking
Stacey Solomon's fans think they've figured out her baby's name
Gemma Atkinson slams trolls who accused her of having baby with another man
Expert says Cocomelon acts "as a drug" to kids' brains
Can you pronouce these 7 'unique' baby names? They're trickier than you think
Conor McGregor hit by car ‘at full speed’ while cycling
You may also like
2 weeks ago
Suzanne Jackson originally wanted to present Dancing with the Stars
1 month ago
The Dancing With The Stars couples have been revealed
1 month ago
Derry Girls star is the latest to head onto Dancing With The Stars
1 month ago
Here are the first four people officially heading onto Dancing With The Stars
3 months ago
Doireann Garrihy confirmed as new Dancing with the Stars presenter
5 months ago
Westlife's Nicky Byrne has quit Dancing With The Stars
Next Page