His remarks are going to cause quite a stir.

The dad said that children who reject their dinner or other meals should be sent to bed without food.

He said parents shouldn't give into fussy eaters.

The dad told Netmums that he is an extremely strict parent.

He said that he runs quite a strict household and expects his kids to follow a lot of rules.

"I'm a very strict dad, there are a lot of rules in my house. I run a house with rules, probably because I worked in restaurants for many years."

Gino admitted that if his daughter Mia doesn't eat a meal then he will serve it again to teach her a lesson. 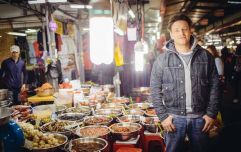 END_OF_DOCUMENT_TOKEN_TO_BE_REPLACED

"There is no such thing as a fussy child, there is a thing of moron parenting.

"It's the parents that can't be bothered to fight, to have an argument at the table, or to see their children go to bed without having any food."

He continued, "If Mia would be at the table and not eating anything, of course, I say, 'If you're not hungry, not eating your ravioli, you can't eat anything."

"She will go to bed without food - and tomorrow morning, instead of cornflakes, guess what she is going to find on the table? The same ravioli that was there."

"You only have to do it once. Of course, they will eat it," he stressed.

popular
Dad asks public to forgive his wife after she killed their three children
16-year-old boy appears in court following murder of teenage girl
Fans call out Jake Paul for insensitive comment on Molly-Mae's baby announcement
Little boy dies of cancer after doctors ignored mother's concerns six times
Colin Farrell says being nominated for an Oscar is "a bit of craic"
Molly Mae says becoming a mum is the best thing that ever happened to her
Tributes pour in for 22-year-old woman killed in Mayo crash
You may also like
3 years ago
Three reasons why your child might be a fussy eater and how you can fix it
3 years ago
3 super easy ways to help your children develop healthy eating habits
4 years ago
Why you should never give your child the same food two days in a row
5 years ago
Emotional eater? This is how it affects your children
3 days ago
Regé-Jean Page is officially the most handsome man in the world, according to research
3 days ago
Blake Lively to star in film adaption of It Ends With Us
Next Page