Selling Sunset star Heather Rae Young has revealed that she's having a baby boy with her partner Tarek El Moussa.

The realtor announced her pregnancy earlier this month but had a gender reveal party for the baby over the weekend.

Capturing the moment with a sweet video, Heather told her Instagram followers that she's expecting a baby boy.

In it, we see Heather, Tarek, and Tarek's children Taylor and Brayden release party poppers full of blue confetti.

The star was met with messages of congratulations from some of her Selling Sunset cast-mates. 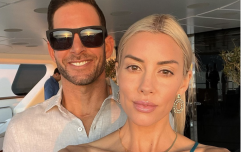 END_OF_DOCUMENT_TOKEN_TO_BE_REPLACED

Last week, Heather announced that she was pregnant with her first child through a series of beach photos on Instagram.

Heather and Tarek first got together in 2019, and they subsequently tied the knot at a ceremony last Autumn. Tarek is already the father to two children, 11-year-old Taylor and 6-year-old Brayden from his previous relationship to Christina Hall.

Speaking to People Magazine about her pregnancy, Heather spoke about the challenges she's faced in her fertility journey to date.

"It was a huge shock," she said. "We just weren't expecting this. We had just gone through IVF. We had embryos on ice. We had a plan."

She continued: "I think when you least expect it and there's no stress in your life, the world just brought us what was meant to be. I'm so excited that it happened like this."

Heather also talked about her close relationship with Tarek's two children, and described herself as their "bonus mom".

Tarek meanwhile said that as he is "obsessed" with his children, having another is "just the icing on the cake".


popular
14-year-old boy drowns at hotel in Turkey after family wedding
Should schools consider introducing a three-day week?
Body of woman discovered in unexplained circumstances
Inside Prince William and Kate's beautiful new home in Windsor
Prince William and Kate's kids won't have a live-in nanny for the first time in their lives
Mum sparks debate after admitting she would buy 12-year-old daughter a sex toy
Stuck For a Baby Name? Let These Online Generators Do The Work For You!
You may also like
1 month ago
Selling Sunset star Maya Vander suffers miscarriage just months after stillbirth
2 months ago
Selling Sunset star just shared devastating update on fertility treatment
3 months ago
Selling Sunset's Maya opens up on watching season 5 following stillbirth
3 months ago
Ben Affleck responds to claims he uses celebrity dating app
4 months ago
3 things we learned from the Selling Sunset trailer
6 months ago
Selling Sunset's Heather shares "great news" after fertility clinic visit
Next Page