Jacqueline Jossa is reportedly in advance talks to replace Michelle Keegan in BBC1's Our Girl.

The 27-year-old, who played Lauren Branning on EastEnders, is said to be "in a good position to bag the role" if a new series of Our Girl goes ahead.

She would be the third soap star to lead the series, following Keegan and EastEnders' Lacey Turner.

“Jacque­line is keen to replace Michelle on Our Girl and has been encouraged to go for it by her former colleague and pal Lacey," a source told The Sun.

“And bosses at the Beeb want a mainstream signing and feel the Queen Of The Jungle fits the bill perfectly. The series hasn’t yet been greenlit, nor any contracts sign­ed, but she’s in a good position to bag it if it all goes ahead.” 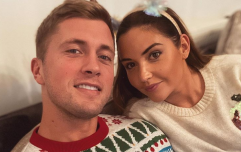 END_OF_DOCUMENT_TOKEN_TO_BE_REPLACED

Earlier this month, Keegan revealed that she had left the BBC1 drama after four years. Her final season as British Army medic Georgie Lane will air this year.

“I’ve had the most incredible four years on the show and I want to thank the BBC for giving me such an amazing opportunity," the actress told The Sun at the time.

“Playing Georgie has been a life changing role for me. I’ve loved every second of the adventure so it was a very hard decision to make not to return. I feel it is the right time to explore other exciting opportunities but I’m so happy to be part of the new series coming soon so it’s not the end just yet.”

popular
"My heart sank": Tubridy hit with backlash over Toy Show remark
Woman gives birth to baby boy and girl less than 12 months apart
Parents told to stop buying selection boxes for kids- here's why
"Losing a baby is the ultimate loss, but to watch on over a video call is soul destroying"
Third child dies from scarlet fever in UK- here are the symptoms to look out for
Conjoined twins return to Ireland after successful surgery
Having an Elf on the Shelf can actually be bad for your kids
You may also like
2 years ago
'Maybe see you again one day': Jacqueline Jossa sends fans wild as she hints at possible EastEnders return
2 years ago
Jacqueline Jossa is creating a clothing collection for 'working mums'
2 years ago
Kylie Jenner sent a message to Jacqueline Jossa and her reaction was priceless
2 years ago
Dan Osborne makes public apology to his wife Jacqueline Jossa following cheating allegations
2 years ago
'This isn't new for me' Jaqueline Jossa addresses cheating claims about husband, Dan Osbourne
2 years ago
I'm A Celeb's Jacqueline Jossa had the best response to pregnancy rumours
Next Page