Actor Jamie Dornan and his wife Amelia Warner are reportedly expecting their second child together.

E! News claims that Amelia showed off a hint of a baby bump whilst on holiday last month, prompting the speculation. 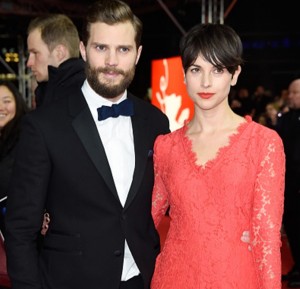 While it has not yet been confirmed by the Fifty Shades of Grey star, we don’t expect it to be.

The couple didn’t confirm the arrival of their daughter Dulcie, now two years old, until after she was born.

And quite rightly so, they deserve as much privacy as the rest of us!

popular
Expert says Cocomelon acts "as a drug" to kids' brains
Elf on the Shelf is actually pretty bad for your kids, according to an expert
4 ways to fix hard slime with ingredients you probably already have at home
I kicked my daughter's friend out of her birthday party- was I wrong?
Irish company create app that will send your kids messages from an Elf
Prince William and Princess Kate would welcome a fourth child with open arms
Can you pronouce these 7 'unique' baby names? They're trickier than you think
You may also like
3 months ago
Leonardo DiCaprio and Camila Morrone have broken up
3 months ago
Vogue Williams faces backlash after admitting she only wears clothes once
3 months ago
Gilmore Girls star Alexis Bledel splits from husband of 8 years
3 months ago
Mrs Hinch opens up about being Stacey Solomon's bridesmaid
5 months ago
Victoria Beckham reveals why she is 'terrified' of Harper using social media
6 months ago
Actress Michelle Williams is pregnant with her third baby
Next Page