Kamiyah Mobley, Kidnapped As A Baby, Meets Her Parents For The First Time

She was kidnapped from a Florida maternity ward as a newborn baby in 1998, but this week Kamiyah Mobley was been found alive and living with her abductor, Gloria Williams (51) in South Carolina.

Now the teen, who had been raised Alexis Manigo, has met her real parents Shanara Mobley and Craig Aiken for the first time.

Kamiyah was stolen from the arms of her mother just hours after she was born by a woman posing as a nurse at University Medical Centre, Florida.

Using grainy footage from a hospital surveillance camera, police created a photofit of the kidnapper, which was widely circulated throughout the FBI investigation, but no trace of the child was ever found.

Incredibly, the cold case was reopened this week when a DNA test was sought for a woman who "had an inclination" she may not belong to the mother who raised her.

Police have charged Gloria Williams of Walterboro, South Carolina (pictured below in a Facebook photo with Kamiyah) with kidnapping. She will be extradited to Florida and faces life in prison.

Writing about her despair over the situation on Facebook, Kamiyah said:

“She raised me with everything I needed and most of all everything I wanted,”
“My mother is no felon. The ignorant ones won’t understand that.” 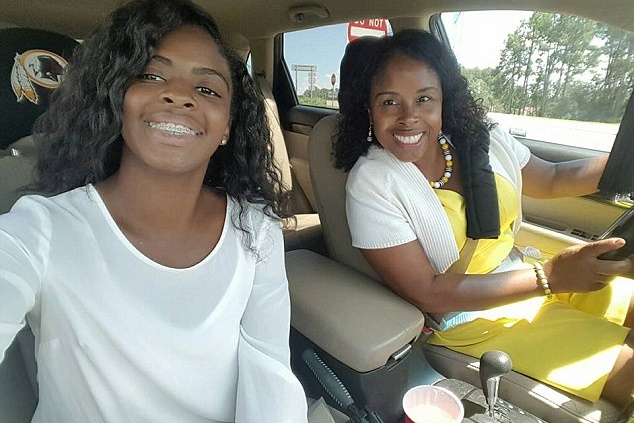 According to Williams' neighbours, there was nothing suspicious about the woman and her daughter. The family (Williams is understood to have two other children) were well liked and involved in the local community.

"She wasn't an abused child or a child who got in trouble. But she grew up with a lie for 18 years," Joseph Jenkins, who lives in the same street as Williams, told the Associated Press.

Speaking about her daughter's disappearance in 2008, Shanara Mobley told The Florida Times-Union newspaper that on her daughter's birthday every year she wrapped a piece of birthday cake in foil and placed it in the freezer.

"It's stressful to wake up every day, knowing that your child is out there and you have no way to reach her or talk to her," she said.

Shanara Mobley was just 16 when her daughter was born and spent eight hours with the child before she was taken. She later sued the hospital and was awarded $1.5m. Shanara went on to have three more children who are all eager to meet their older sister.

Kamiyah's father Craig Aiken was in prison when his daughter was abducted. Speaking to reporters after he met his daughter for the first time, he said:

“I told her I was glad to see her and that I loved her,”

“The first meeting was beautiful. It’s a feeling that you can’t explain.”


popular
Parent's Benefit Leave extended from today - here's what you need to know
"You're disgusting": Prince William roars at photographer who was 'stalking' his family
I tried 'slow parenting' for a year and I'm never going back
6 fun things to do in Dublin on your next family day out
Expert says Cocomelon acts "as a drug" to kids' brains
Vicky Phelan shares message of support with Charlie Bird as she deals with pain
Planning a family trip to Kerry? Discover everything Muckross House has to offer this summer