Khloe Kardashian reveals why she opted for surrogacy.

Earlier this month, Khloe Kardashian confirmed she was expecting her second child.

The mum opted for surrogacy, which she feels incredibly grateful for.

However, the reason why Khloe decided to go down the surrogate route has now been revealed.

A source close to the soon-to-be mum-of-two explained that Khloe didn't want to put her body in jeopardy again.

At the start of the year, Khloe and Kim promised each other that they'd get into the best shape possible. Because of this agreement, Khloe felt like surrogacy was the best option for her.

An insider told Heat Magazine that the main reason was because of health reasons.

"There were medical reasons that factored into her decision to use a surrogate, but not putting such a strain on her body was a huge motivation."

The insider said, "[Kim and Khloé] made a pact at the start of the year that they'd go all out to get into the best possible shape and they've thrown themselves into the project."

During a previous season of The Kardashians, Khloe admitted she thought surrogacy would be easy. 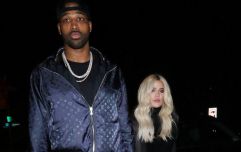 END_OF_DOCUMENT_TOKEN_TO_BE_REPLACED

However, she later discovered that it wasn't as easy as she once believed.

"There are so many tests they have to do and all these things. I thought it would be a much easier process. And it’s not."

Khloe said the process has been very tedious.

However, the reality star said she's incredibly excited about becoming a mum again.

"Khloe is incredibly grateful to the extraordinary surrogate for such a beautiful blessing. We'd like to ask for kindness and privacy so that Khloe can focus on her family."

Tristan Thompson is the father of Khloe's second child.

popular
The most popular children's books in Ireland have been revealed
'Don't do it if you are a parent' – paediatrician warns against viral organising hack
6 unusual and unique family-friendly activities to try in Ireland's Hidden Heartlands this autumn
Well it's official, children misbehave the most around this parent
Five children rescued from van in Cork as driver is arrested
Here's when Florence Pugh's new Irish film lands on Netflix
Mum shares important warning after almost losing her newborn to a kiss
You may also like
5 days ago
Fans defend Khloe Kardashian for posing in hospital bed with her newborn
1 week ago
"Done with this trauma": Khloe Kardashian speaks out about Tristan cheating scandal
1 month ago
Khloe Kardashian 'on cloud nine' after welcoming a baby boy
2 months ago
Khloe Kardashian doesn't see herself as a single mum
2 months ago
Here's when season 2 of The Kardashians returns to our screens
2 months ago
Khloe Kardashian had no idea Tristan cheated until after their surrogate got pregnant
Next Page