Khloe and Tristan split up in December.

Khloe Kardashian didn't know Tristan cheated on her until after their surrogate got pregnant.

A source told The Mirror that Khloe had no idea about her partner's infidelity until after their second child was conceived.

The pair were living together and raising their daughter True just before the cheating scandal emerged.

A source told The Mirror, "The baby was conceived via surrogate before it was revealed to Khloe and the public that Tristan was having a baby with someone else in December."

It is believed the couple's second child was conceived in November.

A representative for Khloe revealed she cannot wait to become a mum for the second time.

"Khloe is incredibly grateful to the extraordinary surrogate for such a beautiful blessing. We'd like to ask for kindness and privacy so that Khloe can focus on her family." 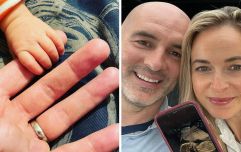 END_OF_DOCUMENT_TOKEN_TO_BE_REPLACED

According to reports, Khloe and Tristan's second child is due any day now. Some sources even claim their baby has already been born.

Khloe and Tristan have had an on-off relationship since they first started dating in 2016.

They most recently split up after it was revealed that the basketball player slept with Maralee Nichols. Tristan cheated on Khloe on the night of his 30th birthday, just after she hosted a lavish birthday party for him.

It later emerged that Maralee Nichols was pregnant with the sportsman's child.

Tristan is also a dad to his and Khloe's 4-year-old daughter True.

He also shares a son named Prince with his ex-partner Jordan Craig.

popular
Vogue Williams opens up about her divorce from Brian McFadden
Emma Pattison made distressed call to sister before murder-suicide
Dunnes Stores launches stunning collection of Communion dresses
Shows like Bluey and Peppa Pig are actually bad for kids, expert warns
Expert says Cocomelon acts "as a drug" to kids' brains
Emma Pattison: Tributes paid following death of head teacher and her family
Brendan Fraser blamed himself after son's autism diagnosis
You may also like
2 weeks ago
It's a girl! Criminal Minds star Shemar Moore becomes a dad for the first time at 52
2 weeks ago
Princess Eugenie reveals she is pregnant with baby #2
2 weeks ago
Gorka Marquez and Gemma Atkinson expecting baby #2
2 weeks ago
The symptoms of severe combined immunodeficiency to look out for in babies
3 weeks ago
It's a boy! Ailbhe Garrihy gives birth to her second child
4 weeks ago
Irish YouTuber Melanie Murphy welcomes a baby girl
Next Page