The young fan broke down into tears when Ryan Tubridy turned to her in the audience to ask her biggest star a question. She couldn't even speak she was so overwhelmed, so Ryan brought her up on stage to sit next to her star and feel more at ease.

Her question even got a giggle out of the audience for how appropriate it was to the situation, when she asked the star "how do I stay positive when I feel overwhelmed?".

.@Jack_Septic_Eye answered questions from his fans including one young lady, Jane Anne O'Sullivan, who was very excited at the chance to meet her hero. #latelate pic.twitter.com/V3oIrJNGxs 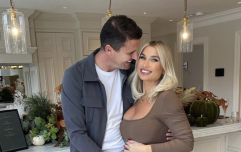 END_OF_DOCUMENT_TOKEN_TO_BE_REPLACED

Seán McLaughlin is originally from Athlone and under the YouTube name "JackSepticEye", he has built up a major following of over 18 million loyal fans. Seriously impressive. You can check him out here below with his interview from last night.

popular
Father took daughter to hospital three times before she died of Strep A
CMO confirms death of child in Ireland from invasive Strep A
The government has launched a new funding model for Irish childcare services
"Hard to be a parent": Made In Chelsea's Maeva D’Ascanio rushes newborn son to A&E
Here's your chance to WIN a €500 toy voucher just in time for Christmas, with Petits Filous
Billie Faiers reveals the name of her third child
Woman dies in Mexico after couple "cut" unborn baby from her womb and claim it's theirs
You may also like
2 weeks ago
Kourtney Kardashian explains why she kisses Travis Barker....like that
2 weeks ago
Carl Woods confirms break up from Katie Price
3 weeks ago
Paul Mescal details "rude" interaction with fan
3 weeks ago
The Bold Type star Katie Stevens expecting first child
4 weeks ago
Too early? Stacey Solomon shocks fan after they spot Christmas tree in her house
1 month ago
James Corden claims he hasn't done anything wrong after restaurant ban
Next Page