LGBTQ+ discrimination banned in the workplace, US Supreme Court rules

An incredible move during Pride month.

LGBTQ+ discrimination has been banned in the workplace in the States, the Supreme Court has ruled.

Discrimination against a person because of their sexual orientation or gender identity is now prohibited under the new federal civil rights law.

"An employer who fires an individual for being homosexual or transgender fires that person for traits or actions it would not have questioned in members of a different sex," wrote Justice Neil Gorsuch.

"Sex plays a necessary and undisguisable role in the decision, exactly what Title VII forbids."

"An employer who fires a woman, Hannah, because she is insufficiently feminine and also fires a man, Bob, for being insufficiently masculine may treat men and women as groups more or less equally," he wrote.

"But in both cases the employer fires an individual in part because of sex." 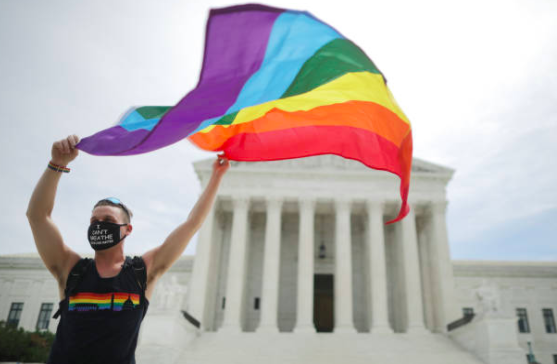 END_OF_DOCUMENT_TOKEN_TO_BE_REPLACED

This landmark decision is the first that has supported the LGBTQ+ community in the States since 2015, when same-sex marriage was ruled legal across the country.

This new ruling came after two gay men and one transgender woman were fired from their employment. They sued their employers under grounds of discrimination against their sexual orientations and gender identity respectively.

Gerald Bostock was dismissed after his employers discovered that he had joined a "gay softball league." Donald Zarda was fired from his skydiving job in 2010, and Aimee Stephens was let go from her job after she told her manager she had plans to transition.

"There are truly no words to describe just how elated I am," Bostock told ABC News.

"When I was fired seven years ago, I was devastated. But this fight became about so much more than me.

"I am sincerely grateful to the Supreme Court, my attorneys, the ACLU and every person who supported me on this journey. Today, we can go to work without the fear of being fired for who we are and who we love."