"I'll never get over it"

A mum-of-four who lost her sons in a London house fire has spoken out.

The grief-stricken mum said her life will never be the same.

Speaking to The Times, Deveca Rose said her sons were her world.

The four boys died after an "intense" house fire in Sutton, London. It is understood that they were alone in the house when the blaze broke out.

Despite firefighters' best efforts, the four boys, aged 3 and 4, were pronounced dead in hospital.

She said the twins were "my heart, my soul."

"They were everything. Everything feels so surreal. I can't function," she admitted.

The mum said she will never come to terms with their deaths. 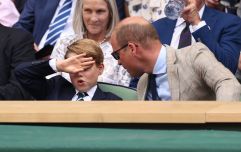 END_OF_DOCUMENT_TOKEN_TO_BE_REPLACED

“I can't get over it, I'll never get over it. They lit up everybody's world and I will always be sorry that they went so soon.

"They had so much planned and now they're gone," she said.

The children's father Dalton Hoath thanked emergency services for doing everything they could to save his boys.

“We would like to thank all the emergency services who did so much to try and save our boys, and also the local community who have come together at this difficult time,” he said.

A 27-year-old woman was arrested on suspicion of child neglect last week.

Metropolitan Police London confirmed she was released on bail until mid-January.

South Area Command Unit is carrying out an extensive investigation.

The cause of the December 16th fire is unknown.

popular
'Don't do it if you are a parent' – paediatrician warns against viral organising hack
6 unusual and unique family-friendly activities to try in Ireland's Hidden Heartlands this autumn
Well it's official, children misbehave the most around this parent
True crime drama follows girl who was kidnapped twice by the same man
Five children rescued from van in Cork as driver is arrested
The most popular children's books in Ireland have been revealed
New parents are being "thrown out" of hospital far too early
You may also like
4 days ago
Why Cuba's redefinition of the family is so significant
1 month ago
Woman lost baby after police stopped for coffee en route to hospital
1 month ago
People who drink tea regularly live longer, according to new study
1 month ago
16-year-old girl dies after inhaling laughing gas at party
1 month ago
Young girl rushed to hospital with head injury after freak accident on rollercoaster
1 month ago
Mum speaks out after leaving her 2-year-old daughter alone in car
Next Page