Malin Andersson has introduced her daughter to the world.

The former reality star's little girl was born on the 28th of January.

Malin explained that she has been in a "surreal baby bubble" since she gave birth to her baby girl.

The mum said she wanted to take some time away from social media to recover but to also spend quality time with her family.

She shared a stunning black and white photo of her cradling her daughter to announce her arrival.

Alongside the sweet photo, the mum wrote: "Here she is. Me and Jared have been in the most beautiful, surreal baby bubble and so I took a month out to just focus on our family."

"I ended up having an emergency c-section with her, they took her out of the same scar Consy came from.. that was a bittersweet experience for me which I needed to take in after." 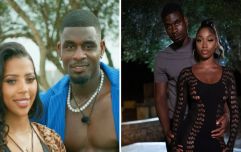 END_OF_DOCUMENT_TOKEN_TO_BE_REPLACED

The mum said she "can’t even describe the amount of love" her daughter has given her.

She also said it feels surreal "to be a mum again".

"I look at her and I have to pinch myself."

Malin tragically lost her first child, baby Consy, when she was only four weeks old. Her daughter, who was her firstborn child, passed away in 2019.

Speaking of the harrowing loss, Malin said: "You see… Baby loss is also about the JOURNEY to losing. The trauma. The pain. The PTSD from pretty much living in the hospital every day, hearing the beeping sound of the heart rate monitor. From being next to them every second."

Malin praised her followers for their support.


popular
"You're disgusting": Prince William roars at photographer who was 'stalking' his family
Expert says Cocomelon acts "as a drug" to kids' brains
6 fun things to do in Dublin on your next family day out
Mum left horrified after child's Roblox avatar is sexual assaulted during game
4 ways to fix hard slime with ingredients you probably already have at home
Woman (50s) dies after falling into water at Dún Laoghaire pier
Mum slated for letting kids stay up late at sleepover- was she wrong?

You may also like
4 days ago
"It's not even funny anymore": Love Island boys accused of 'bullying' Ekin-Su
4 days ago
Get ready! Casa Amor is happening sooner than you think
6 days ago
This is why Gemma's famous father hasn't been mentioned on Love Island
2 weeks ago
Love Island's Olivia and Alex Bowen welcome their first child
2 weeks ago
Fans are just realising Luca from Love Island looks just like this Irish singer
3 weeks ago
Should I let my children watch Love Island?
Next Page