On Wednesday, Meghan Markle had her baby shower alongside some of her nearest and dearest in New York City.

The party which took place in the Mark Hotel in the suave Upper East Side of the city, saw the Duchess of Sussex take over the penthouse suite to host a party which included a suitcase as a gift for each attendee, a flower arranging workshop, a harpist, cute edible biscuits and a candy cotton machine.

The entire party was reportedly organised and paid for by tennis pro, Serena Williams, and also featured a lavish display of flowers which Meghan then decided to donate to a New York charity.

Meghan donated all the flowers to Repeat Roses, an organisation which recycles flowers from events and sends them to hospitals and care centres.

Repeat Roses picking up the flowers after the baby shower... 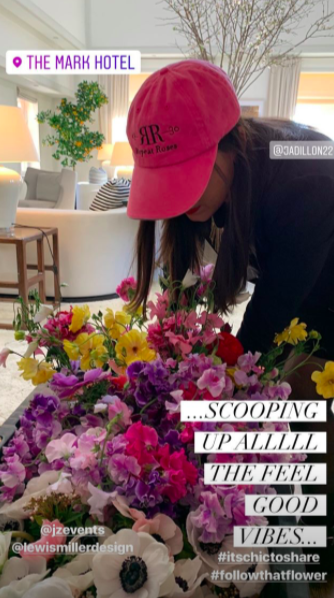 END_OF_DOCUMENT_TOKEN_TO_BE_REPLACED

“Repeat Roses was so honoured to help petal-it-forward with a baby shower experience for the Duchess of Sussex and her thoughtful friends by creating a ripple effect of kindness across the community,” Repeat Roses CEO Jennifer Grove told PEOPLE.

And one attendee at the party, CBS News morning show co-host Gayle King who was also at the party revealed that they all made a bouquet to donate at the party.

“It just speaks to who she is. She’s very kind, very generous,” she added.


popular
#MomLife: 7 things I wish I done more of when my children were babies
Staycation: 10 bargain buys to turn your back garden into a chic hotel patio
Apparently, women feel 'phantom' baby kicks even years after pregnancy
Kate and William are pretty strict about school nights when it comes to George and Charlotte
Could this really be the most perfect family staycation?
Body found in search for missing five-year-old boy in Co. Mayo
Stacey Solomon has the most brilliant hack for avoiding messy mealtimes
You may also like
1 month ago
Prince Harry and Meghan Markle volunteer to deliver meals to vulnerable in LA
1 month ago
Harry and Meghan say they will 'not be engaging' with UK tabloid press anymore
1 month ago
Meghan Markle is due to give her first post 'Megxit' TV interview and it's happening next week
1 month ago
Meghan Markle's favourite mascara is one of the all-time beauty greats
1 month ago
Meghan Markle and Prince Harry have revealed the name of their new non-profit organisation
2 months ago
Insider shares update on how baby Archie is adjusting to life in California
Next Page